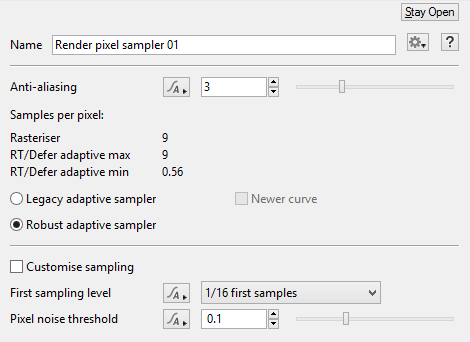 First sampling level: This essentially controls how "adaptive" the anti-aliasing is, i.e. the range of possible sampling values, from the maximum number (set by the anti-aliasing value itself, e.g. 8) to the minimum number, which is some fraction of the max. The smaller fraction the minimum value is vs. the maximum, the more adaptive the AA is, and the more potential render time can be saved. However higher levels of adaptivity do have the potential to result in increased noise in some areas or to completely miss some important details in the image. When you change the first sampling level, notice how it changes the minimum number of samples per pixel in the text below the Anti-aliasing slider.