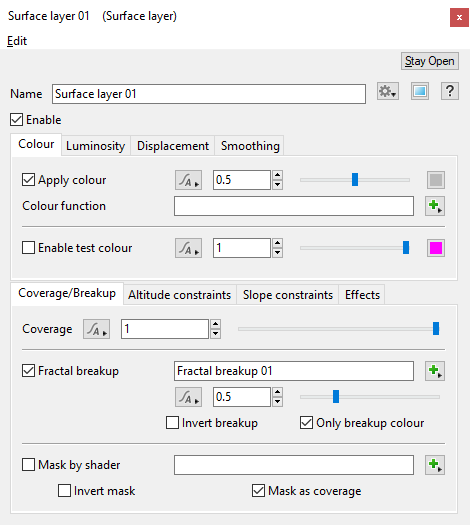 The Surface Layer is most often used to create surface textures for the terrain. As one of the more complex nodes in Terragen, its parameters have been grouped together based on a particular aspect of the surface that they affect. 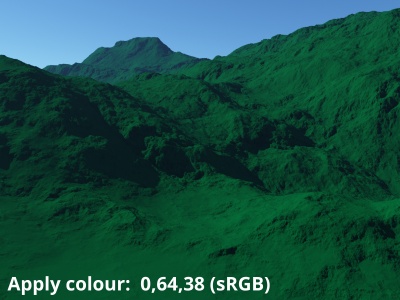 The settings below allow you to treat the surface layer as luminous, in other words it can glow and emit light. The three settings work together to determine the final luminosity value.

The Displacement tab allows you to control the three dimensional shape of the surface by means of displacement. This process moves the micropolygons that make up a rendered scene in 3D space to create their final shape. You provide the Surface Layer with the information it needs to perform displacement by assigning a shader or function nodes to the Displacement function setting.

We don’t recommend using Surface Layer displacement to create large features in a landscape. For the best results large features such as mountains should be created as part of the Terrain group and be connected above the Compute Terrain node. This ensures that one texture coordinate solution will exist in the project which all nodes have access to, and that textures and displacements will align properly. 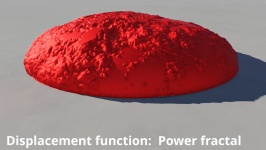 The settings on this tab allow you to control how Terragen blends this Surface layer’s displacements and the displacements from its child layers, with an averaged, i.e. smoothed, version of the Terrain as computed by the last Compute terrain node in its node network branch.. 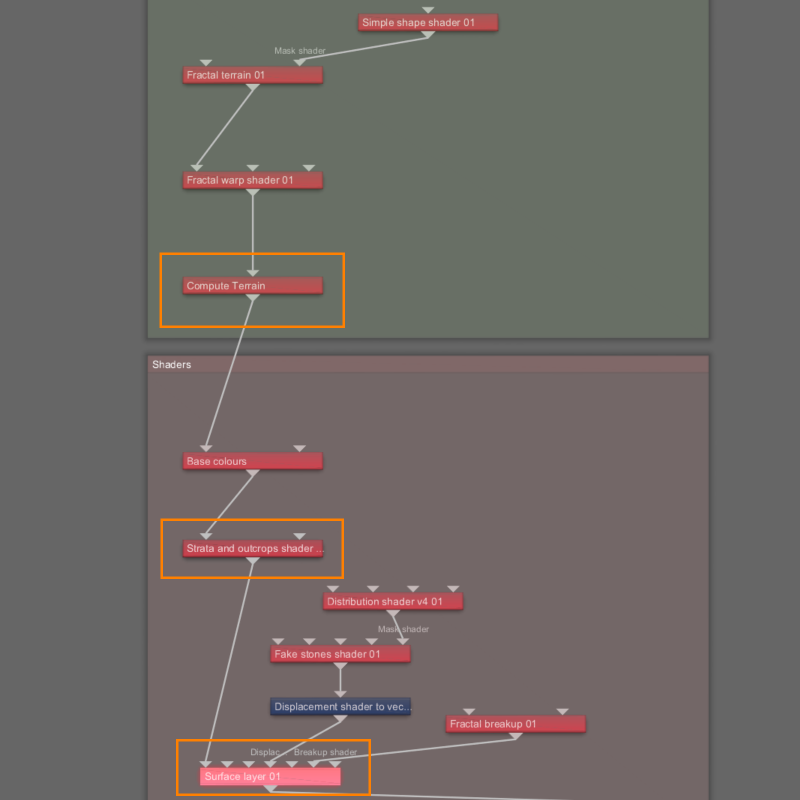 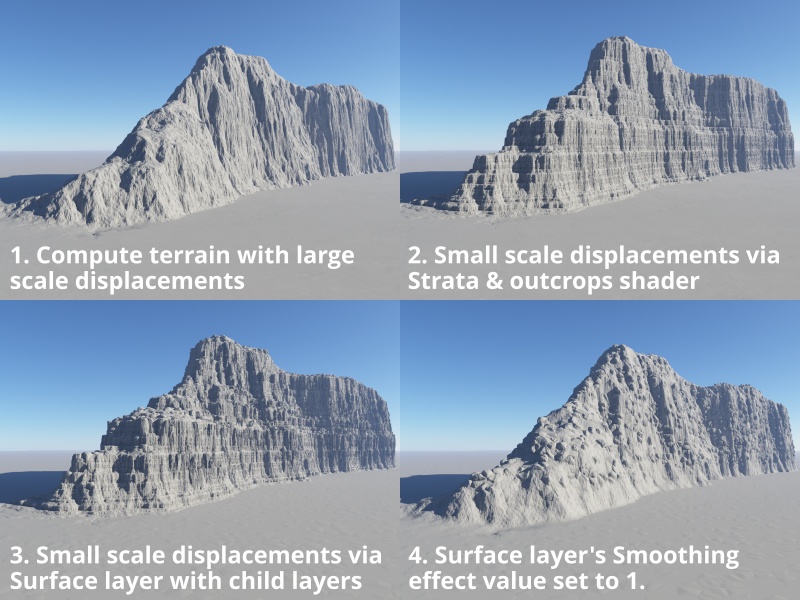 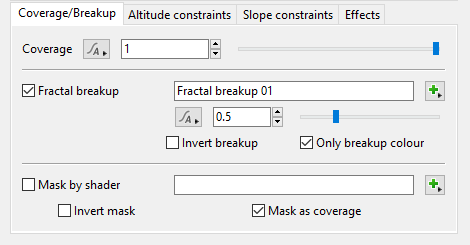 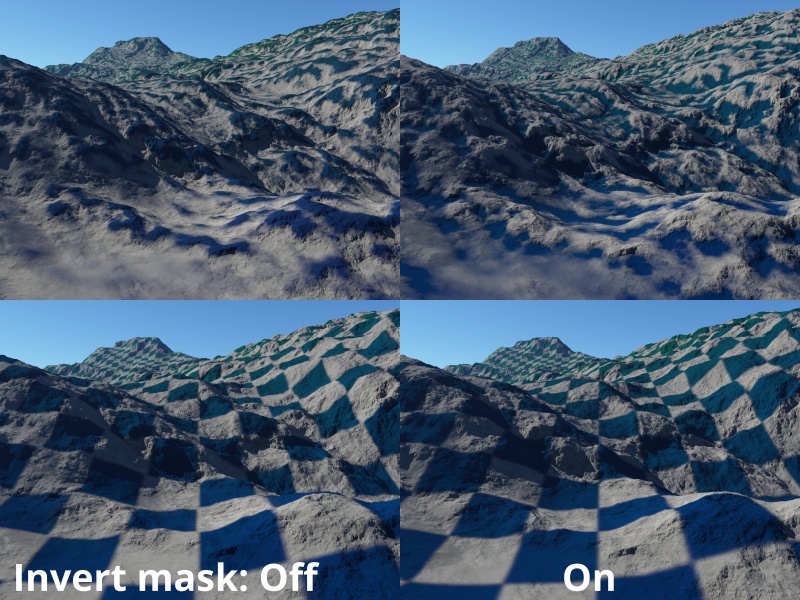 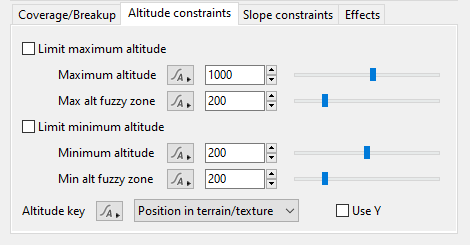 The Altitude Constraints tab has settings which let you control where the surface layer appears by altitude or height. For example, if your surface layer represents snow you might not want it to appear below a certain height. You can use the 3D Preview to quickly and accurately select altitudes by right clicking in the pane at the altitude you want and selecting “Copy Altitude” from the context menu, then pasting the copied value into the text field for Minimum Altitude by highlighting its current value and pressing “Ctrl + V” on your keyboard. With the Limit minimum altitude checkbox enabled, the snow layer will only cover the terrain to the point at which you clicked in the 3D Preview. 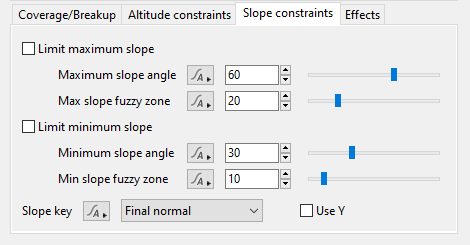 The Slope Constraints tab has settings which let you control where the surface layer appears according to slope. For example, if your surface layer represents grass you might want it to only grow on slopes that are relatively flat. You can use the 3D Preview to quickly and accurately select the angle of the sloping terrain by right clicking in the pane at the level of the sloping area you want and selecting “Copy Slope Angle” from the context menu, then pasting the copied value into the text field for Maximum slope angle by highlighting its current value and pressing “Ctrl + V” on your keyboard. With the Limit maximum slope checkbox enabled, the grass layer will only be visible on the terrain up to the point at which you clicked in the 3D Preview. 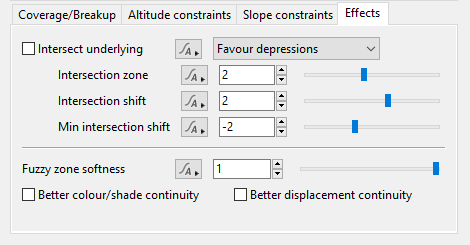 A Compute Terrain node calculates the average terrain and stores this information so that Surface Layers have access to it later. It doesn’t change the terrain displacement, unless the Smooth terrain checkbox is enabled. The node’s Gradient Patch Size setting controls the size in metres that the terrain is sampled at when calculating the average displacement. The larger the patch size, the more influence a terrain feature which is further away, laterally, from the sample point will have. This allows larger depressions and rises to be detected. Smaller values will pick out depressions and rises that occur as smaller scales. Note also, that different patch sizes tend to need different settings for the Intersect Underlying feature to get similar results. Often, the larger the patch size, the higher the parameters' values need to be, but this is not a general rule.

When the settings on the Surface Layer’s Effects tab are enabled, the surface layer compares the current surface displacement against the smoother, averaged version of the terrain calculated by the most recent Compute Terrain node. The results are “weighed” based on how far the displacement is above or below the averaged terrain. This is also referred to as “favor rises” and “favor depressions”.

Favor depressions: This setting causes the surface layer to appear more strongly wherever the terrain is lower than nearby areas, the depressions, and appear weaker where the terrain is higher than nearby areas, the rises.
Favor rises: This setting does the opposite of Favor depressions. Points that are higher than the averaged nearby terrain, the rises, are weighted more strongly than points that are lower, the depressions.
Displacement intersection: This setting compares this surface layer, including any of this layer's displacements and the displacements performed by its child layers to the averaged terrain. When selected, the Smoothing effect setting is automatically enabled and the surface takes on a different displacement from the underlying terrain. The Smoothing effect is not always needed when using this mode and other displacements provided by this layer's children or by previous Surface Layers can allow for interesting effects as they intersect each other.