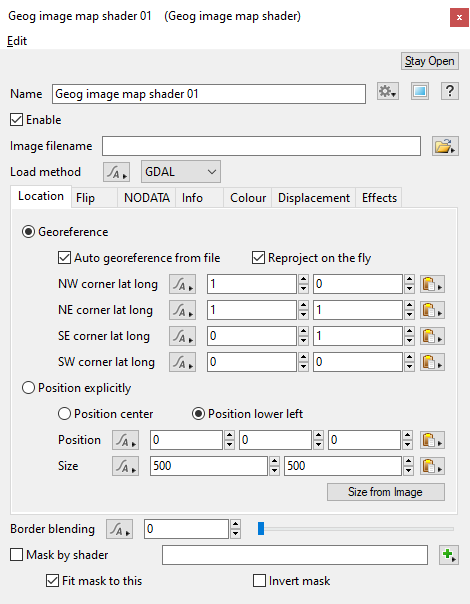 The Geog image map shader can load and georeference images in many raster geospatial data formats. In other words, you can use it to load aerial and satellite photos. Georeferencing means it places images in their correct geographic location on the planet, as long as the georeferencing information is available with the image. Please note that the node does not support vector images.

The Geog image map shader is a specialised version of the Image Map Shader. It shares quite a few settings with the Image map shader but also provides new ones for working with geospatial data.

You can see a list of the image formats supported by the node here. Terragen supports all of the formats which have "Yes" in the "Compiled by default" column of the table on that page. It also supports JPEG2000 via OpenJPEG. Most commonly used image formats are supported. Please note that not all of the supported formats have been tested, there are a lot of them and some are quite obscure.

Georeferencing settings are only available in the Professional edition. However the correct size for the image will still be calculated based on georeferencing if needed.

When you use a georeferenced image and the Georeference parameter is checked it will be placed at the correct position on the planet. However accuracy falls away as you move away from the origin of the planet, which corresponds to 0° latitude, 0° longitude or the Prime Meridian at the Equator. To ensure the best accuracy when working with georeferenced data it's suggested that you move the planet origin to the area you're interested in. This is less important with image data but can be a factor if you're using the image for displacement or along with georeferenced DEMs.

Those steps move the planet origin to the area you're interested and should ensure the best results.

The Geog image map shader works best with images that are already have the raster data aligned north/south. For example some of the US National Land Cover Database images have the raster data rotated within the image bounds. These currently will not display properly. The Geog image map shader will support warping images such as these in the future. In the meantime you may want to warp these images yourself, perhaps using the GDAL tools.

The node uses GDAL and PROJ.4 to load and georeference image files.

GDAL: Select this option for Geospatial Data Abstraction Library and other geographic type images.
Terragen: This option is useful for other types of image formats which GDAL doesn’t support such as OpenEXR. It is more consistent with image loading in other nodes. 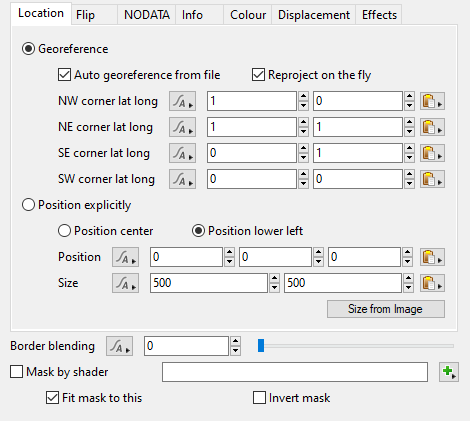 The georeferencing settings below are only available in the Professional version: 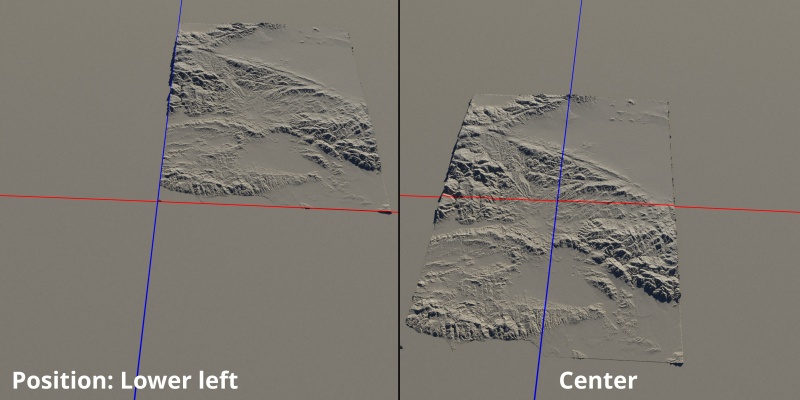 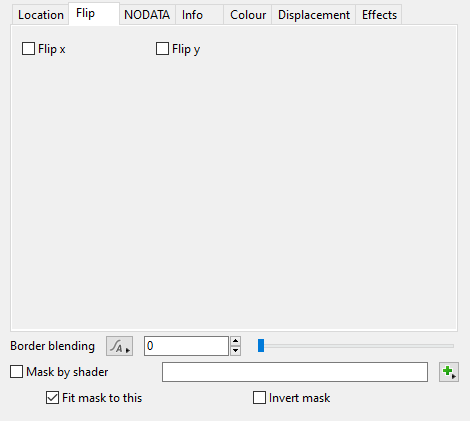 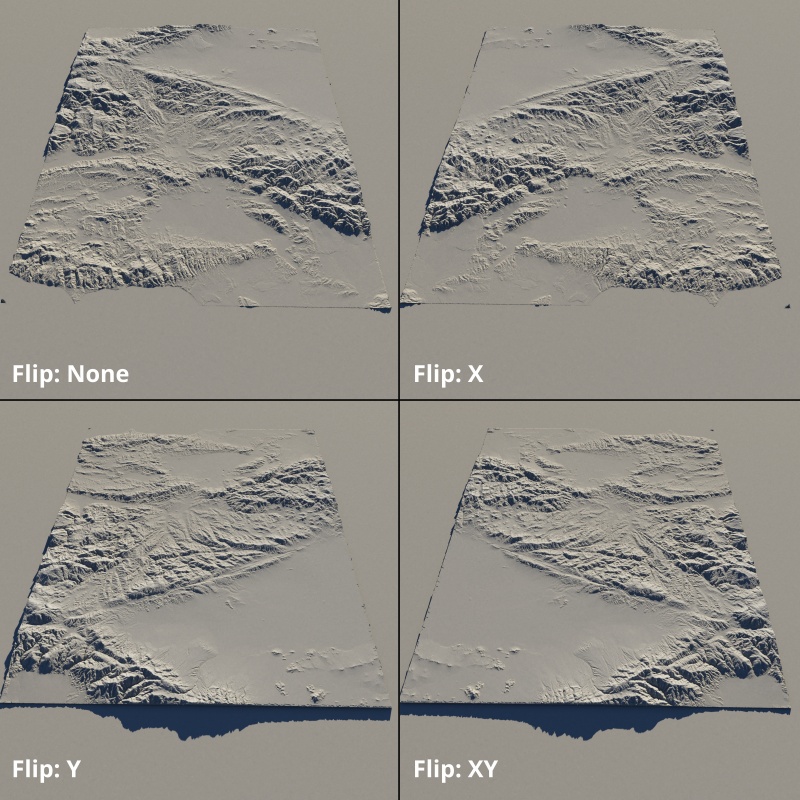 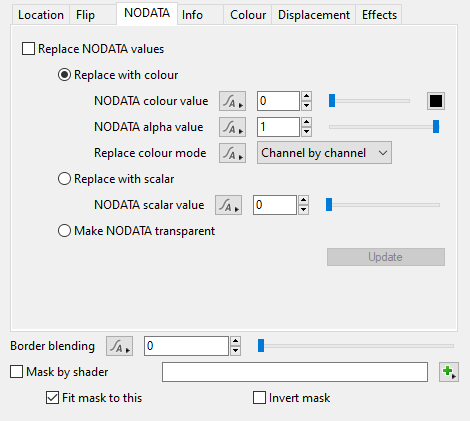 The NODATA tab has settings which let you replace pixels with NODATA values in the image data with another value. Pixels with NODATA values indicate areas in the image where there is missing or invalid data. The NODATA tab parameters let you replace these with a colour, a value or make them transparent. When an image is loaded Terragen tries to do it in a manner which uses the least memory resources, by matching the internal image format as closely as possible to the image file. However replacing NODATA pixels may require that the internal image format takes up a lot more memory. For example, let's say that the image file is an 8 bit greyscale paletted/indexed image. If you chose to replace NODATA pixels and make them transparent then TG would need to change the internal image format from 8 bit to 32 bit RGBA, quadrupling the amount of memory used. As geospatial images can be very large it is worth keeping this in mind if you don't have a lot of memory available. You can check if an image has any NODATA values by looking at the Raster and Projection Info field on the Info tab. 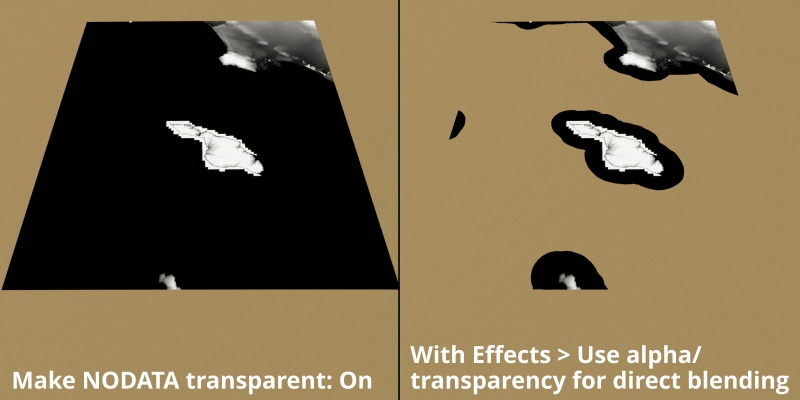 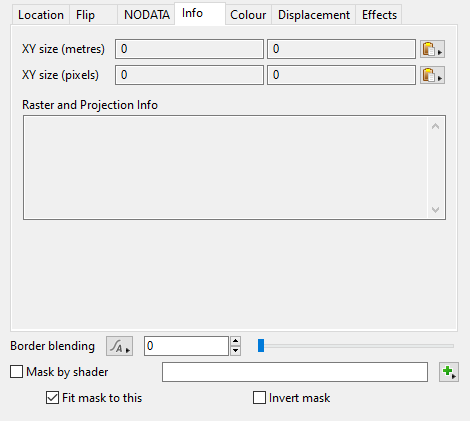 The Info tab displays image data, including the image size in metres and pixels and how the image is projected. The settings on this tab are read only, and although you can’t edit them, you can select them and copy the text. 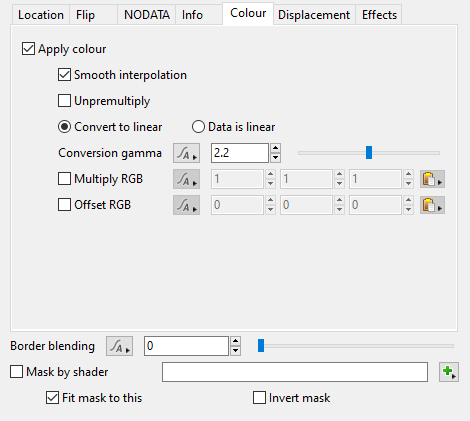 This tab has settings which control how the Geog Image Map Shader generates colour information from the image. 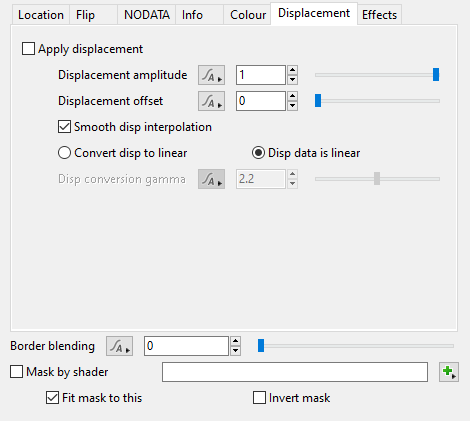 The Displacement tab has settings which control how the Geog Image Map Shader generates displacement from the loaded image. Displacement values are calculated using the luminance of pixels in the image. 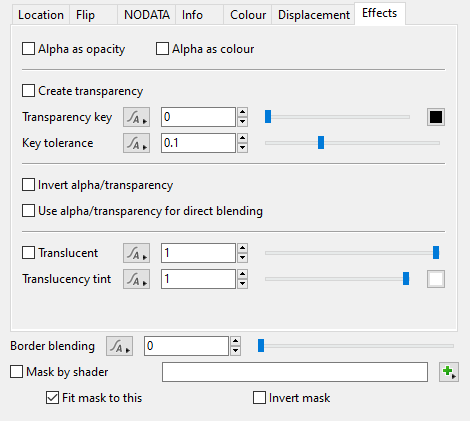 The settings on this tab provide control over the alpha channel, transparency and translucency of the image assigned to the shader.