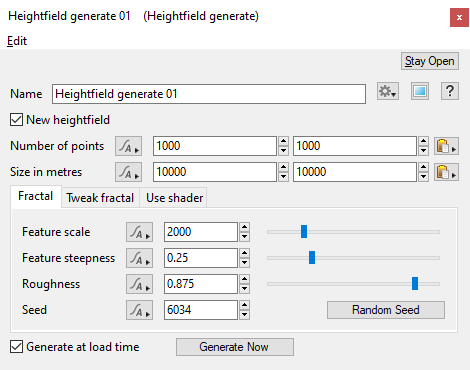 The Heightfield Generate node can be used to generate unique heightfield terrains. Heightfields are of finite resolution and cover a specific area, unlike procedural terrains which have theoretically infinite detail and can cover an entire planet. Heightfields can be based on fractal patterns built into the node itself, or you can use other shaders to generate the height information. This node is especially useful in cases where you wish to apply heightfield specific operations such as Erosion. Procedural displacement may also be used to enhance the detail of a heightfield via the Fractal Detail tab settings which are enabled by default.

The Fractal tab contains settings to let you define the main fractal pattern features used to generate the heightfield.

The Tweak Fractal tab contains settings that allow you to change additional aspects of the fractal pattern used to generate the heightfield.