The Terragen user interface (UI) is based around multiple “layouts,” tabs that are accessed through buttons in the top toolbar. Each layout consists of tools and functionality specific to particular aspects of the scene.

Below the tabs on the left is the Node List. This displays the node in the scene that are relevant to the current layout. The nodes are displayed in a hierarchical list. 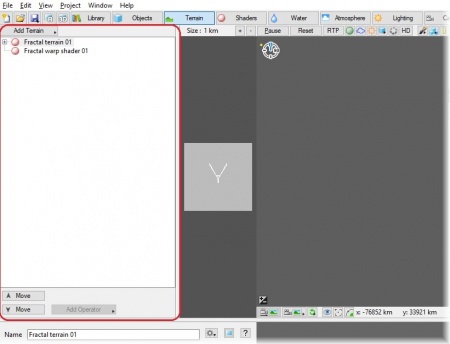 Just to the right of the Node List is a small shader preview window. This generates a realtime preview of the currently selected node, when applicable (not all nodes can be previewed). 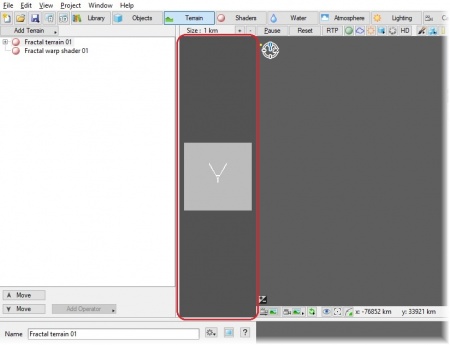 Below the node list is the Node Properties pane. This displays the settings of the node currently selected in the Node List. 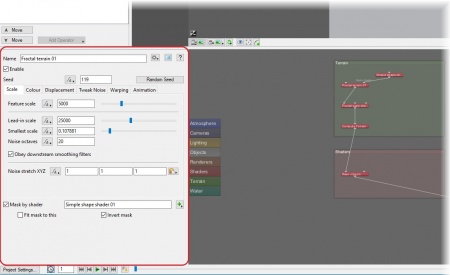 In the upper-right is the 3D preview, which shows a progressively rendered real-time display of the current scene. The elements of the scene that are shown will vary depending on the selected layout.

Below the 3D preview is the Node Network pane. This displays the network of all nodes in the scenes. When you select a layout, the view in this pane will focus on the group of nodes relevant to the current layout. (There is also a Node Network layout which gives you a larger view of the entire node network without the 3D Preview pane).

At the very bottom of the user interface is a toolbar that includes the animation timeline and controls.

Several of the windows in the UI can be resized by placing the mouse cursor between windows where a double-ended arrow appears, and then dragging them. The 3D Preview pane and Node Network pane can be expanded or closed completely with the buttons in the upper-right corners of these windows. If you close one of these windows and wish to display it again, use the Preview and Node Network options in the View menu.