Difference between revisions of "The Node Network and Clip Files"

The node network can look a little intimidating at first as it just looks like crazy lines everywhere connecting to little boxes. However, it can become a very useful tool later on when you understand TG2, as some things are only possibly to do while in the node network view. 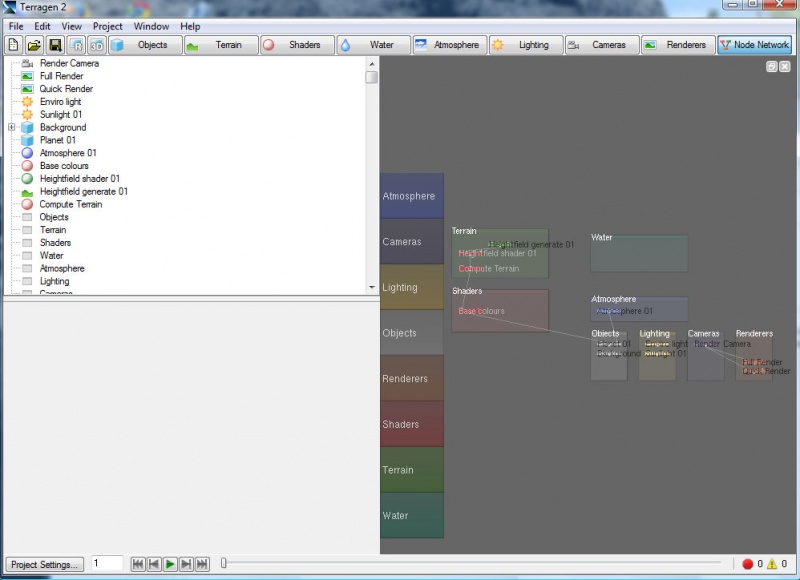 The node network can be navigated very similar to the preview render view. Using the mouse wheel you can zoom in/out, and by pressing Alt and left clicking, you can then drag to pan around.

On the left of the ui you can see the list of every single node in your scene. Clicking on the name of the node will center on it in the network view, and bring up its properties underneath that you often work with while in other views. This can be useful sometimes if you know the name of the node you want, but cannot seem to find it in the network view.

Nodes can be modified by double clicking them in the node network view which will bring a popup of their properties. To create nodes you can simply right click, and then create a node depending on what you want. The hard part comes in learning what each node does, and how it can be connected to other nodes to work. For this you might want to check the Official Node Reference which contains information on each node.

The colored boxes are a list of the groups that TG2 creates by default. Nodes you place properly inside a group become easier to find as they are somewhat sorted. You can also center on a group by clicking the colored boxes that are on the left hand side of the network view. Also, if you want to move a large number of nodes related to each other, groups are a good way to go since if you click the top bar of the group where the title is, it will select all nodes that are inside. To create a new group, right click an empty space in the network view, Create Other --> Group. Then you can double click it to set its name, color, etc.

Not finished yet, will finish later today[edit]

or at least hopefully by the sometime next week.