Vector Displacement - Terragen to Zbrush and back again

In this tutorial, we’ll explore how to make use of Terragen’s ability to import and export vector displacement data in order to harness the power of shaping and modifying terrain features that would otherwise be difficult to accomplish.

For example, heightfield maps are great for displacing surfaces based on height or elevation data, but not so great at creating overhangs. Vector displacements can accomplish this, because in addition to Y axis, or height/elevation data, they contain a sample point’s position data for the X axis and Z axis.

Additionally, you may discover that complex Terragen terrains, such as those with overhangs and lateral displacements, may render significantly faster by making use of the Vector Displacement shader than by simply rendering the project using a normal procedural workflow.

Create a procedural terrain in Terragen[edit]

Starting with the default Terragen project, we’ll remove all the displacements to the terrain, in order to leave a completely smooth and non-displaced planet surface. 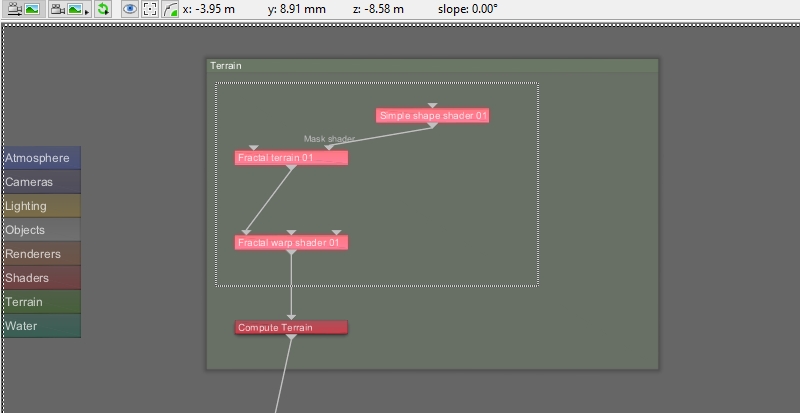 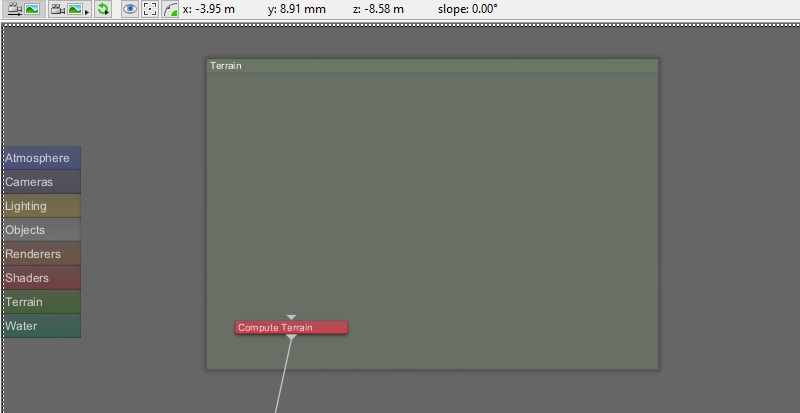 Without the visual reference that a displaced terrain provides, it can be difficult to determine a location or scale in the project, so we’ll add a Landmark object at the origin of the scene for reference. 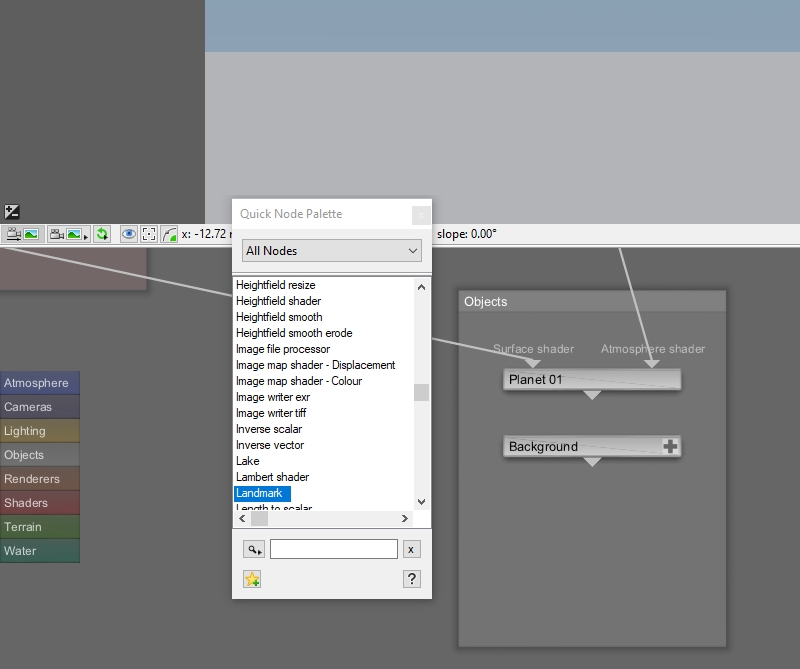 When you manually add a node to a group, it’s a good idea to capture all the nodes in the group. 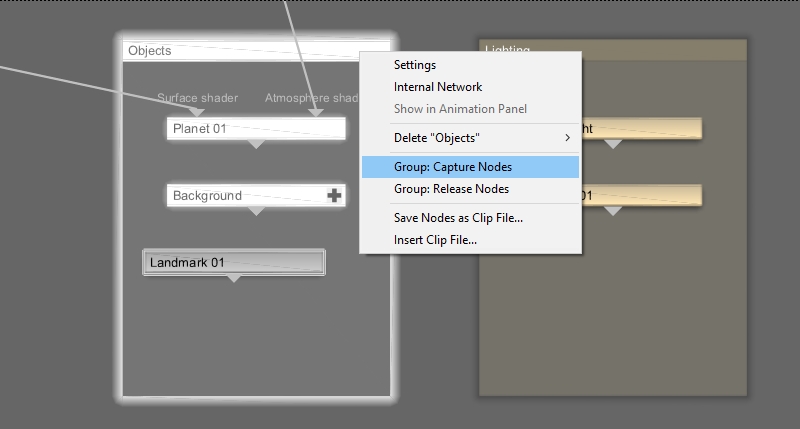 Position the Landmark at the origin of the project, and then scale it to an appropriate size for the terrain or task you are doing. Since we’re creating a relatively small rock pile, the size of the Landmark does not have to be extremely large. 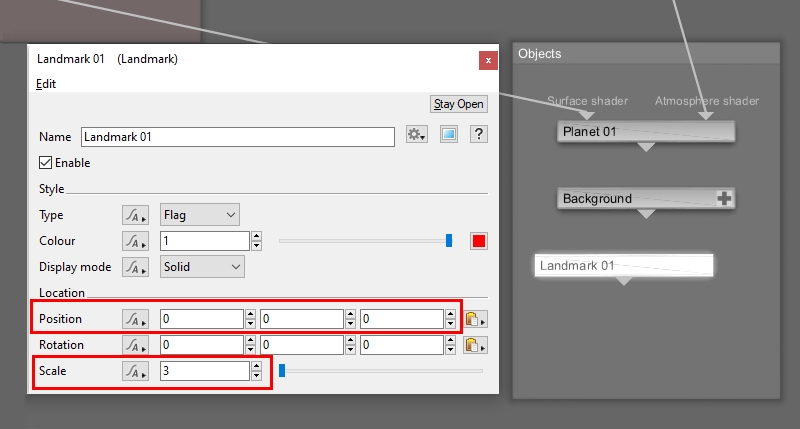 You can automatically center the 3D Preview on any enabled item in the project. 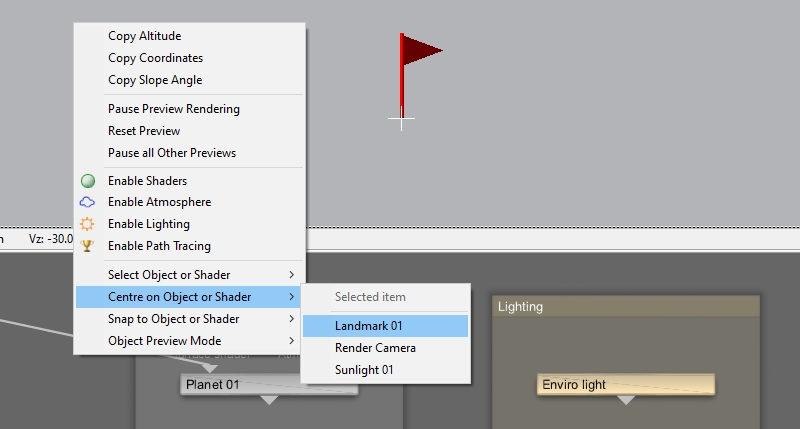 Let’s displace a small mound near the origin of the project. 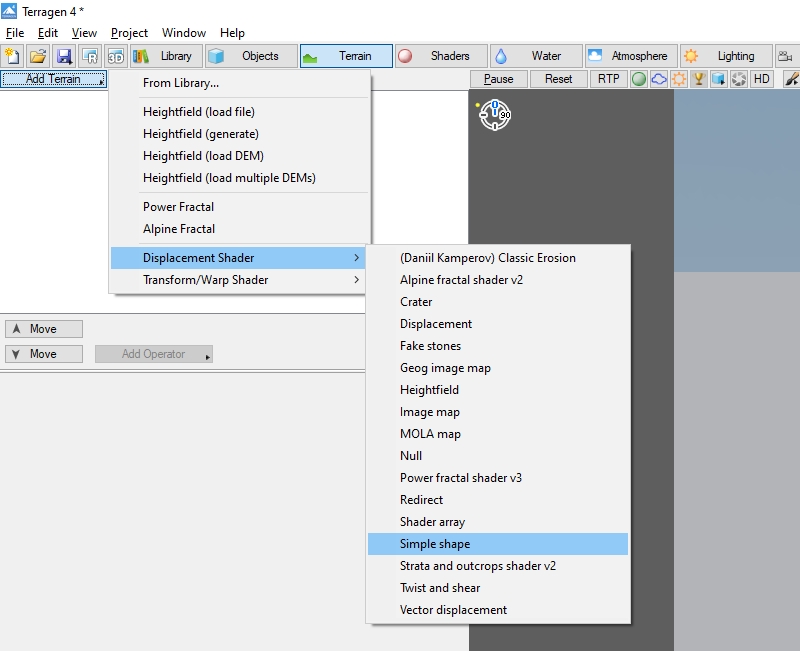 After we define the size and shape of the shader, we can use it to displace the terrain. These settings will result in a soft sloping mound at the origin of the scene. 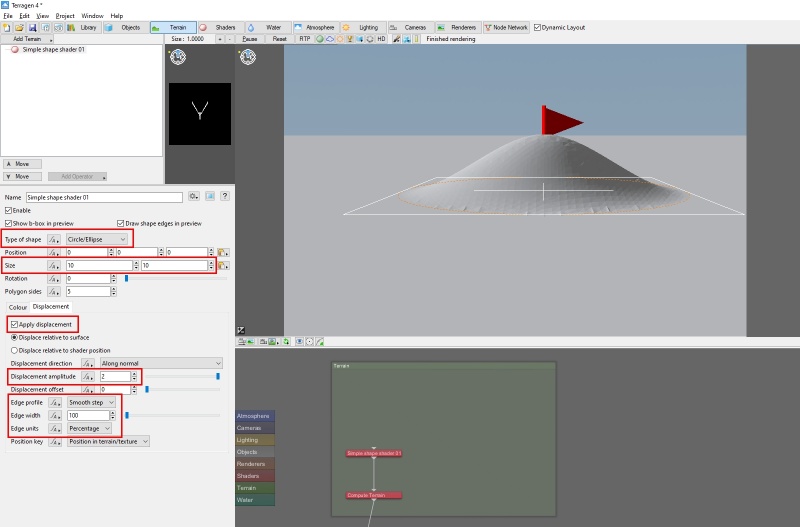 We can change the appearance of the mound to a pile of rocks with the addition of a Fake Stone shader. 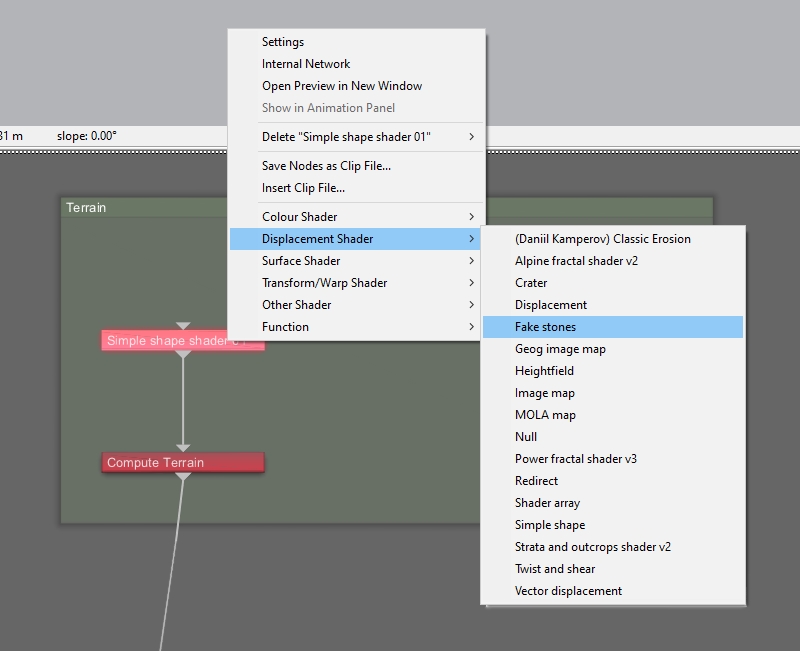 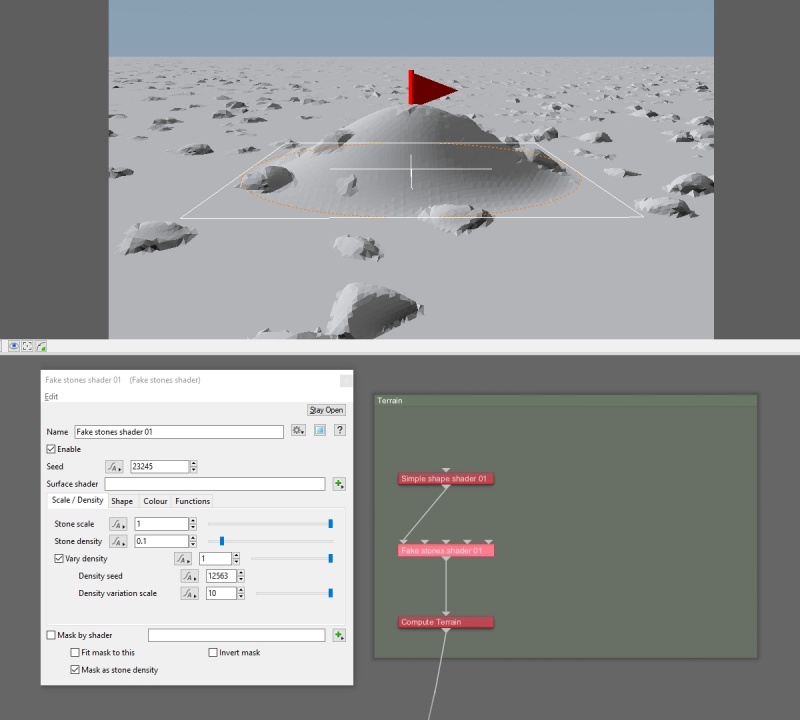 We can restrict the rocks to just the mound area by assigning another Simple Shape shader as a mask to the Fake Stones shader. 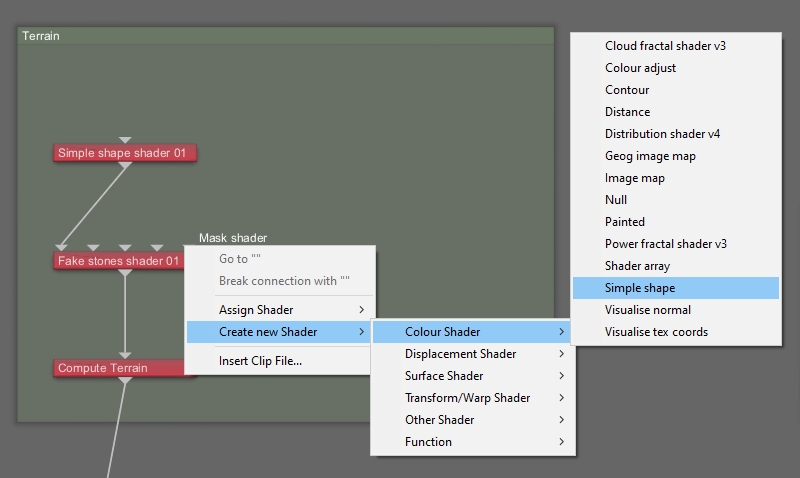 Rename the node so that it’s easier to identify in the project, then apply the settings below to create a colour mask that’s slightly larger than the mound, which will allow the rocks to extend a bit onto the flat ground. 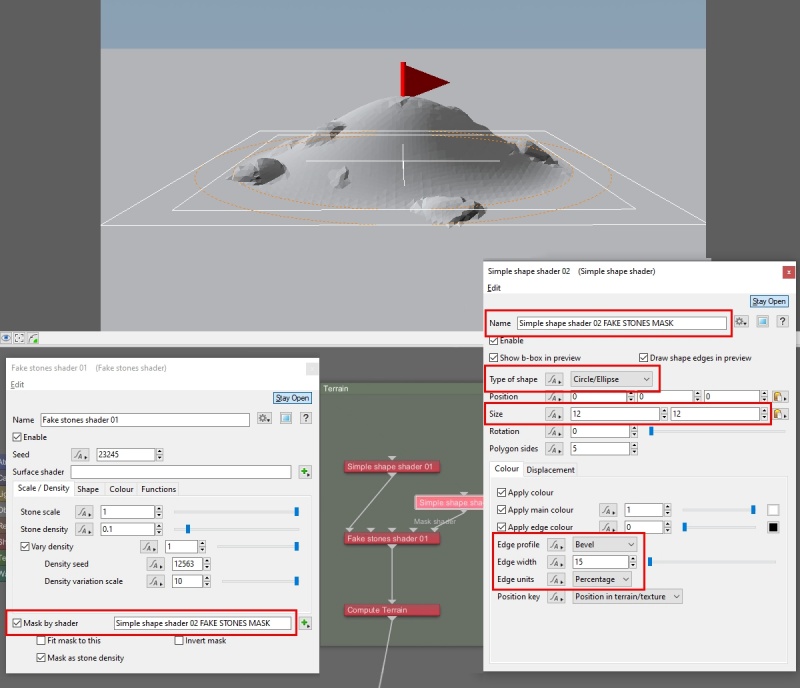 The amount of rocks is controlled by the Fake stones shader’s “Stone density” parameter. When a value of 1.0 is used, the entire masked area will be covered with rocks. Let’s do that. 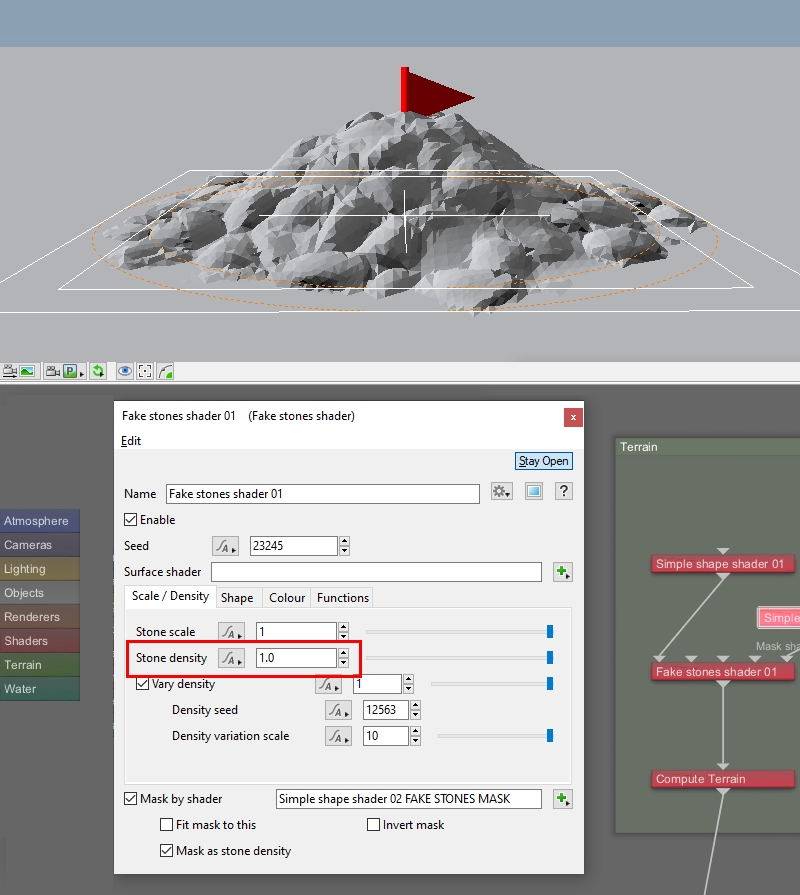 Now that we have a pile of rocks with some overhanging features, we can set up Terragen to render an image suitable for vector displacement.

First, we need to convert the terrain’s displacement data to vector data, and we can do that by adding a “Displacement shader to vector” node to the project. 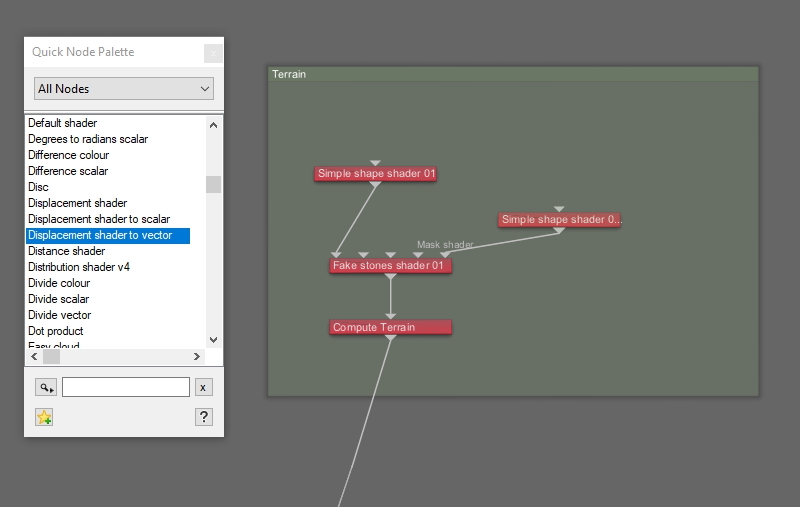 We want to connect this node to the last displacement node used to sculpt the terrain shape, which is the Fake stones shader node. Once connected, open the shader’s preview window to display the vector data as colour values. The red and blue channels contain the X and Z axis data respectively, and the green channel contains the Y axis, or elevation, data. 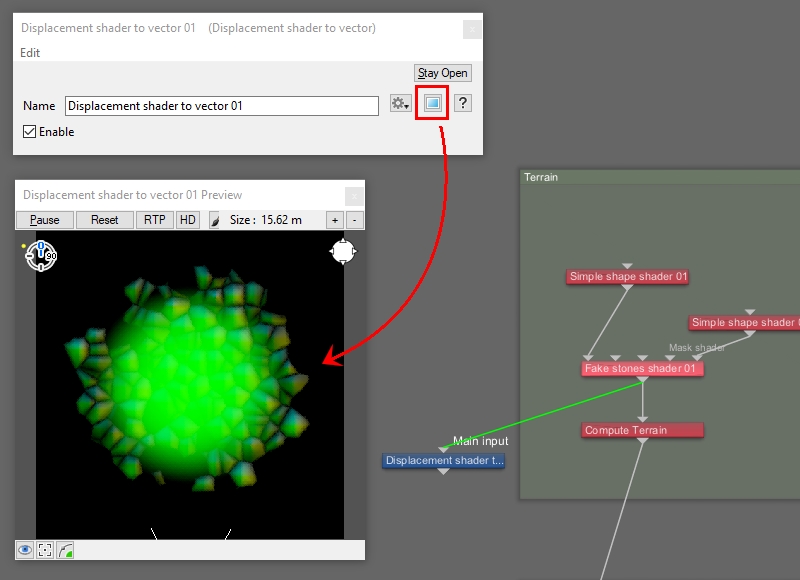 Adding a “Multiply vector” node after the “Displacement shader to vector” node will allow us to fine tune the vector data if necessary, prior to rendering the final vector displacement image for use in another software package.. 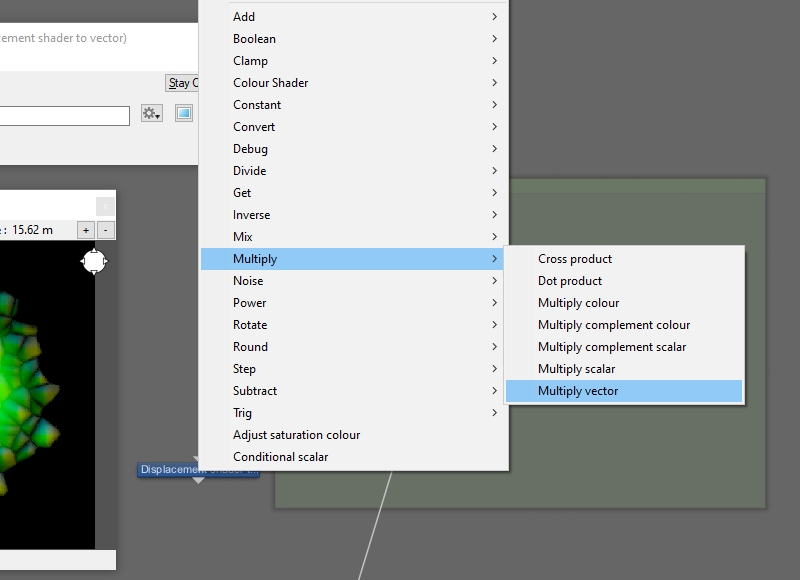 The “Multiply vector” node takes the incoming vector data for each component assigned to its “Main input” and multiplies them by the values assigned in its “Input 2” setting. Shader or function nodes may be assigned to “Input 2”. We’ll add a “Constant vector” node in order to modify the vector data as needed. 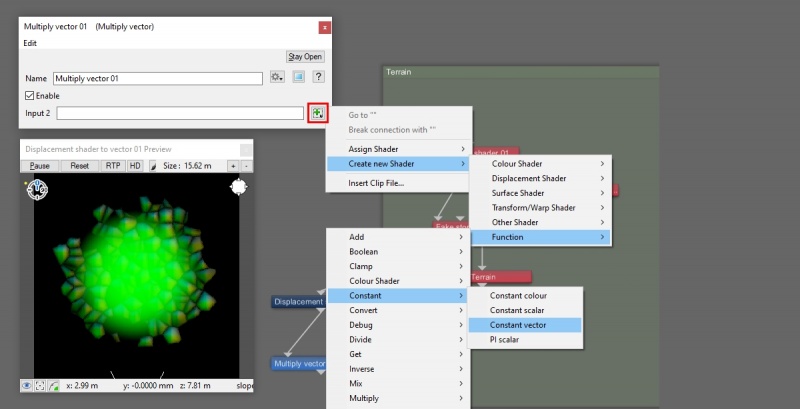 In Terragen the default unit equals one metre. For this tutorial, we’ll import the final vector displacement image into Zbrush, whose unit is equal to one centimeter, so we’ll reduce the vector displacement data appropriately. Notice in the shader preview window how the colour values darken based on the Constant vector’s values.

Next we need to output this data to a shader so that it can be rendered as an image. We’ll use a Default shader to do that, connecting the output from the “Multiply vector” node to the “Luminosity function” input of the “Default shader” node. 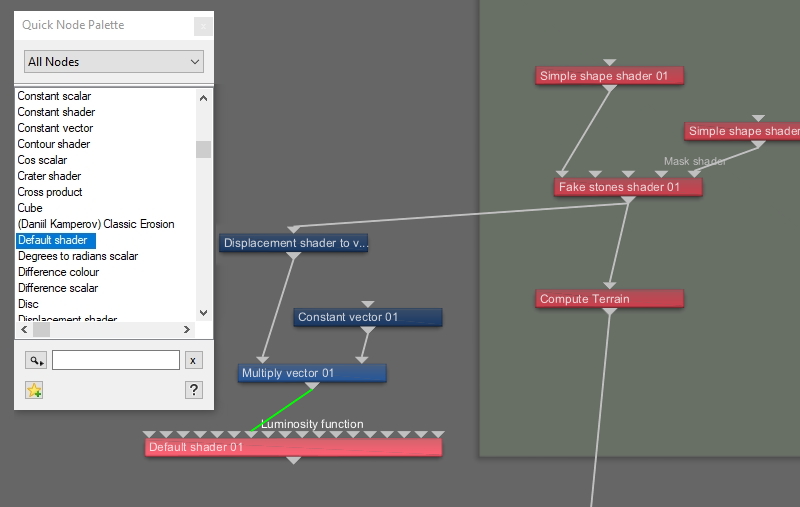 We want the Default shader to respond only to the vector data supplied through its Luminosity function, so we need to disable any other parameter that might contribute to its final look. 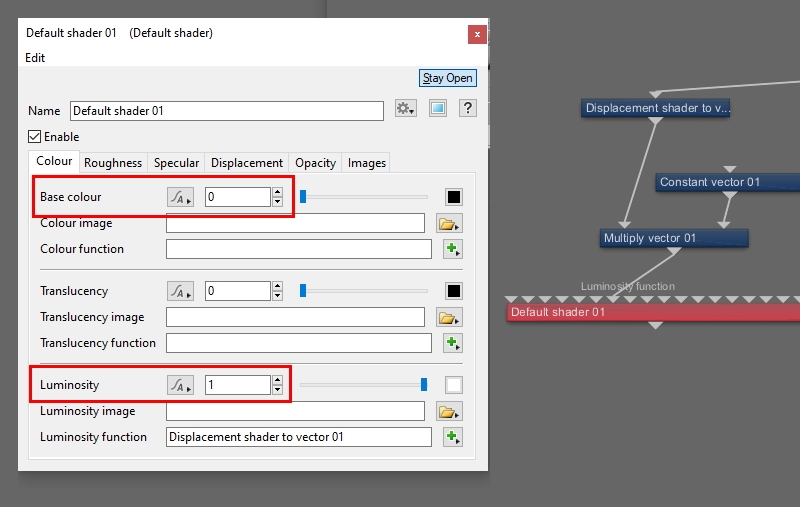 On the Specular tab, make sure the shader receives no reflection or refraction from the environment. 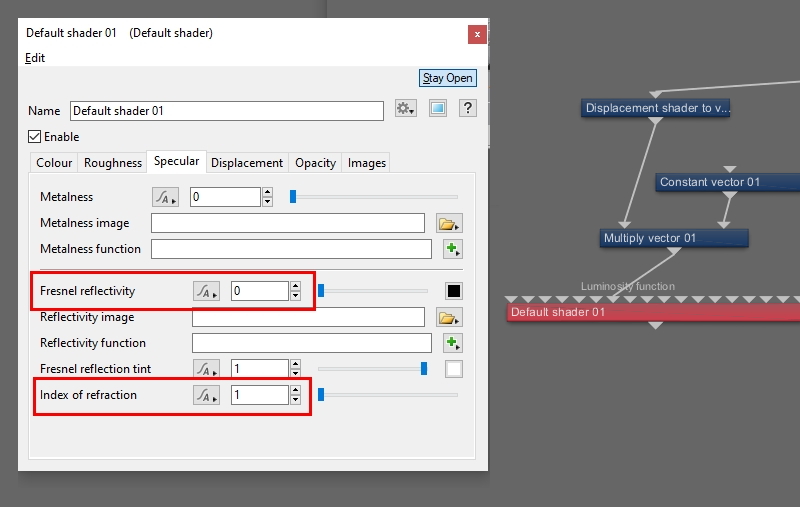 Now we need to connect the Default shader to a surface so that it can be rendered. In order to do that we’ll duplicate the Planet node that’s located in the Object group. In this way, we preserve the planet’s curvature and other settings such as its radius and position.

First we’ll group the new Planet node to itself, in order to assign the group to a render layer later on, and give it a descriptive name so that it’s easy to identify. 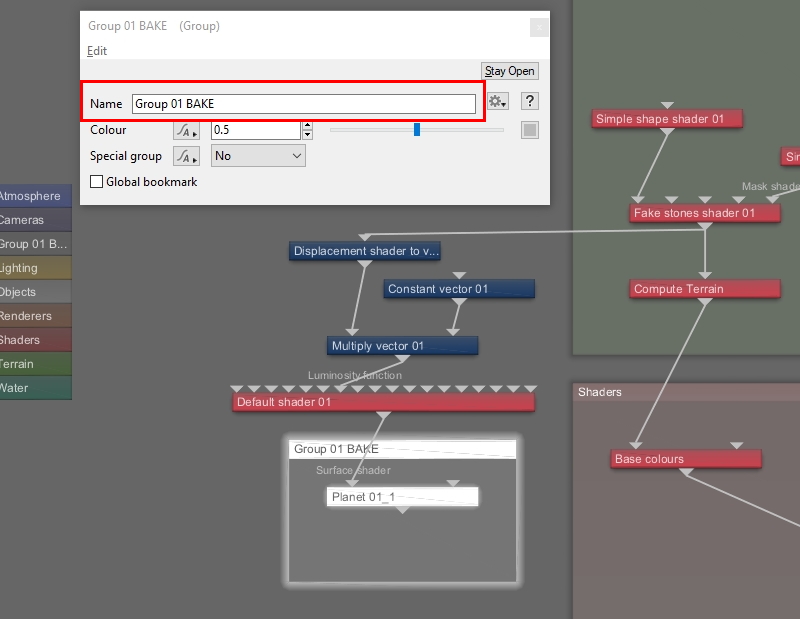 Next, add a new camera to the project, which we’ll use for the new renderer we’ll create in just a moment.

We need to position and rotate the camera so that it’s higher than any terrain features and pointed down at the terrain, then we can change it to an orthographic camera which will allow us to define the size in metres of the terrain we wish to capture, as well as to eliminate any perspective from the camera’s point of view. The rock pile covers about 10 metres, so we'll set the orthographic camera’s width to be slightly larger. It’s also a good idea to rename the camera so that it’s easy to identify later on. 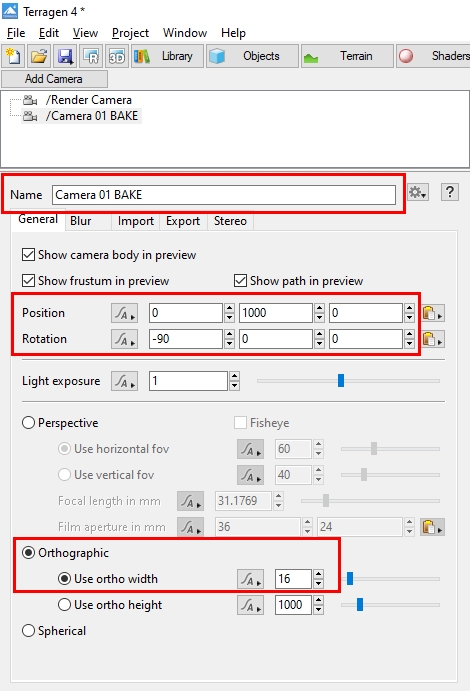 Now add a new renderer to the project. We’ll use this to render the vector displacement image.

Then assign the orthographic camera to the renderer.

The Render Layer feature in Terragen 4 Professional allows us to select which groups of objects will actually render and how they are seen by the renderer. For the render of the vector displacement data we’ll hide everything except the duplicated planet node. Start by creating a new render layer.

Once created, goto the Render layer to open up its dialog window.

Now we can assign the group containing the duplicated Planet node to the Render layer. 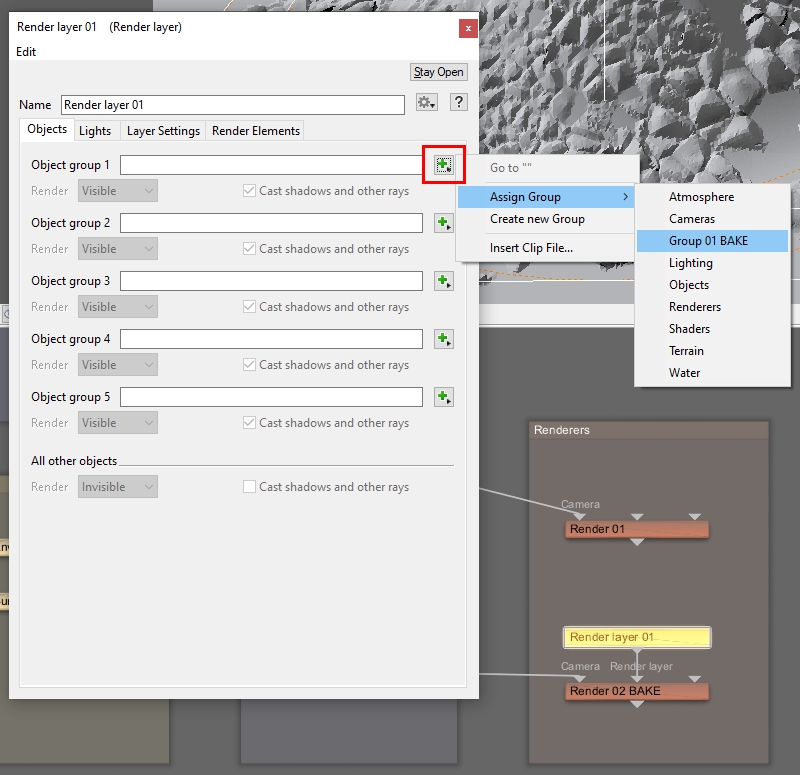 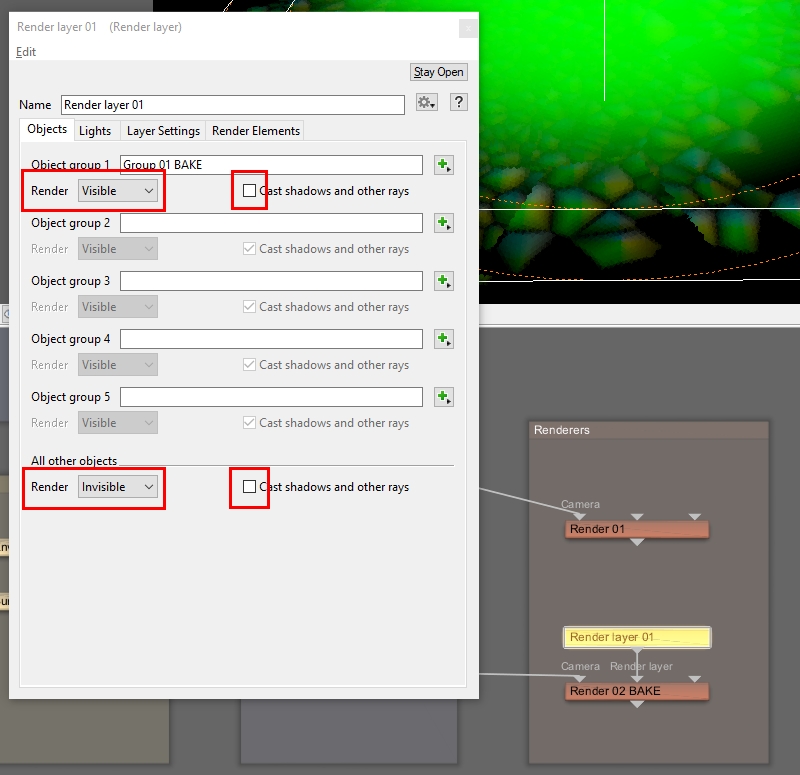 While we’re creating Render layers, let’s make one for the default renderer in the project, which we’ll use as our perspective camera in order to view the project as we normally do. 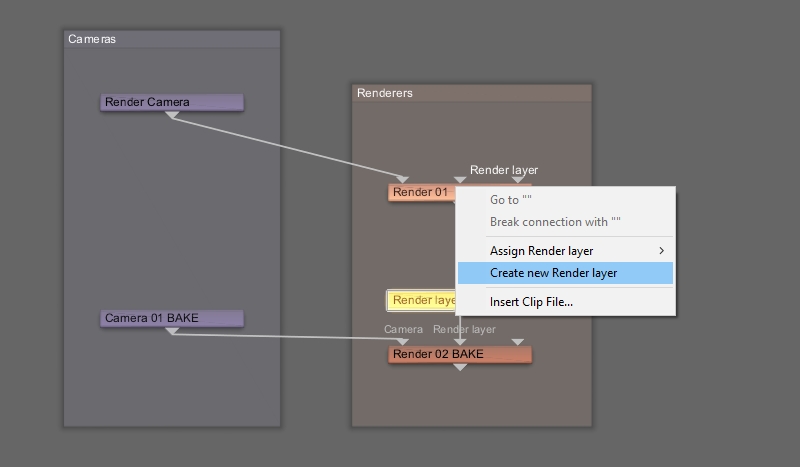 Whenever we switch to this renderer we don’t want to see the duplicated Planet and its luminosity coloured surface, just the normal terrain with the rock pile. Open the Render layer’s dialog window and assign the duplicated Planet group just as before. Then set it to be invisible and not cast shadows or rays, while everything else is visible and casting shadows and rays. 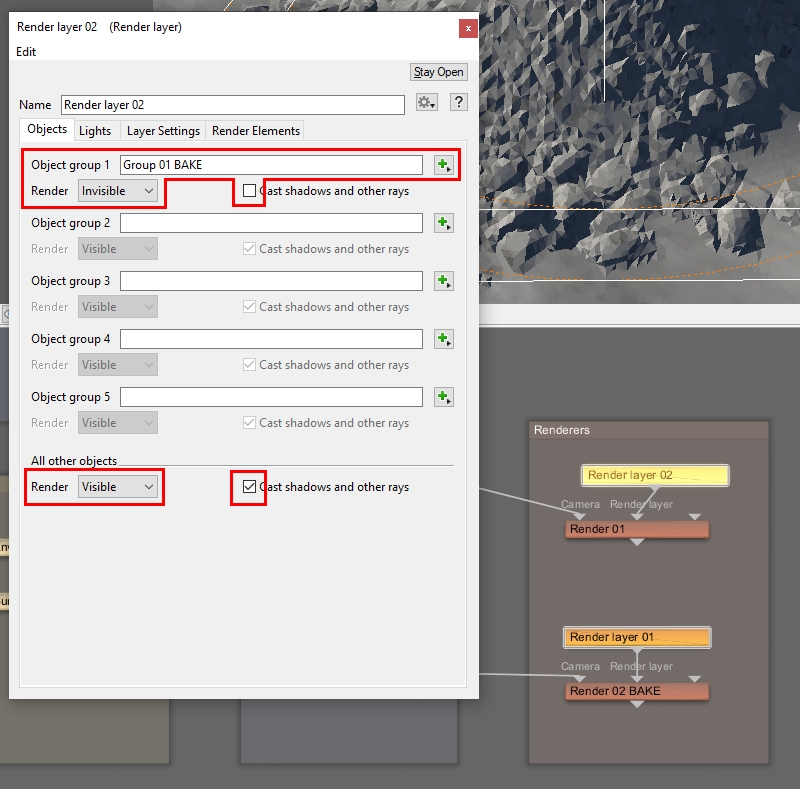 Now we just need to set up the render settings for the renderer itself.

Terragen makes it easy to switch between the different renderer views in the 3D Preview. Just select a renderer in the Render Node List and click on the “Reset” button below the toolbar. If the “Resetting the 3D Preview” warning message appears, just click “Yes”. Terragen will update the 3D Preview pane with the view from the camera assigned to the renderer.

Select the renderer you wish to view.

Many 3D applications expect the vector displacement map to be a square image, so set the Image width and height parameters to the same value. For test renders you might try values like 512 x 512, or 1024 x 1024 because these smaller images will render faster, although there will also be less detail.

As previously mentioned, we want the render to only contain the luminosity values of the planet surface, so uncheck the renderer’s “Atmo/Cloud visible” and “Do shadows” checkboxes.

The “Micropoly detail” parameter controls the level of detail seen by the renderer. For test purposes, you can use low values but for final render set the value to 1.

The use of anti-aliaing can greatly increase both the quality and time it takes to render the image. Low values are good for testing, but use higher values for the final render. 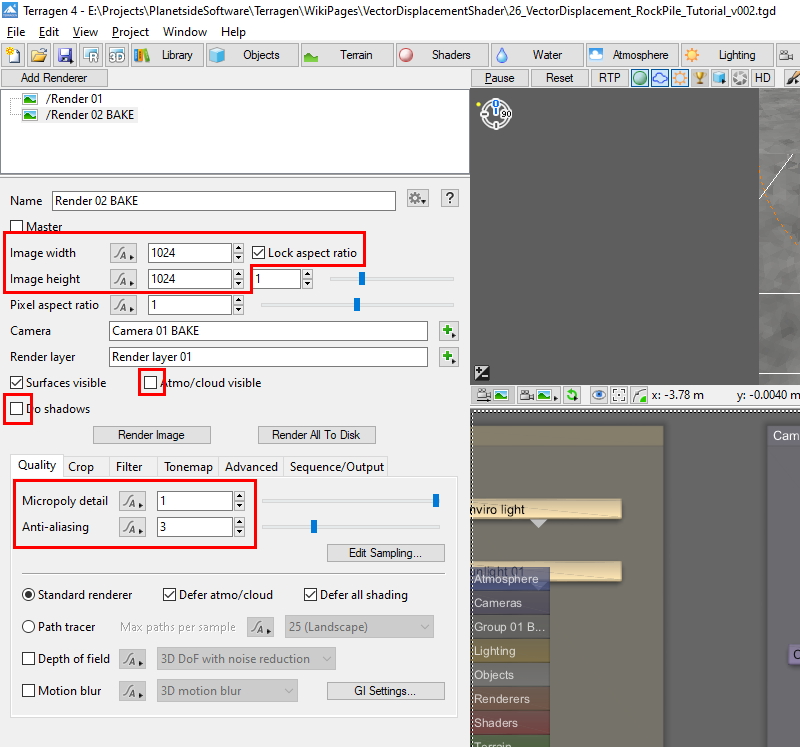 For the same reason we disabled the “Atmo/Clouds visible” and “Do shadows” checkboxes, we can turn off global illumination for the project. Under the “GI settings” button turn off the “GI Cache detail” and “GI sample quality” by setting them to zero. 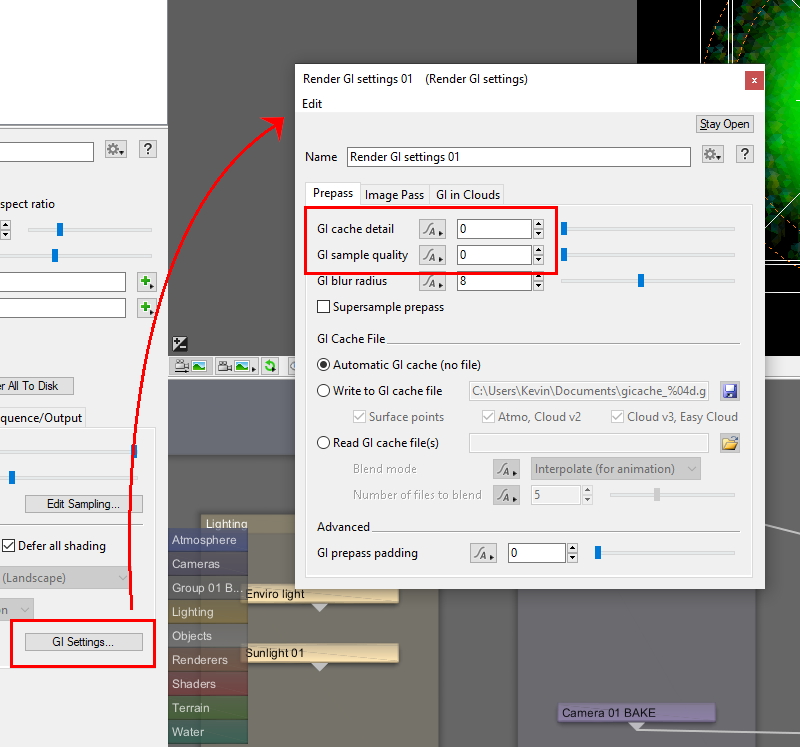 Under the Image Pass tab, disable the “GI surface details”, so as not to introduce additional shading to the rendered image. 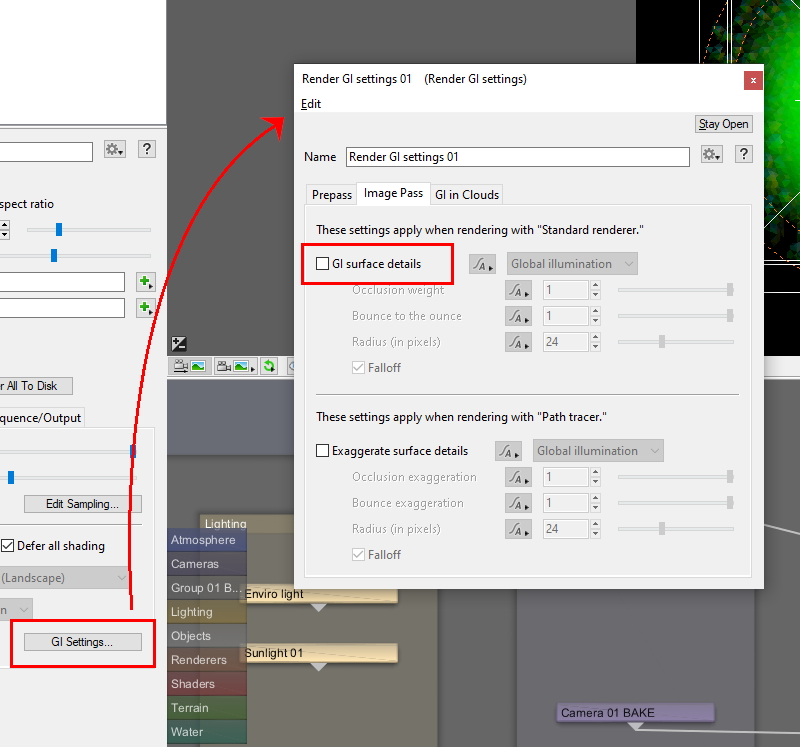 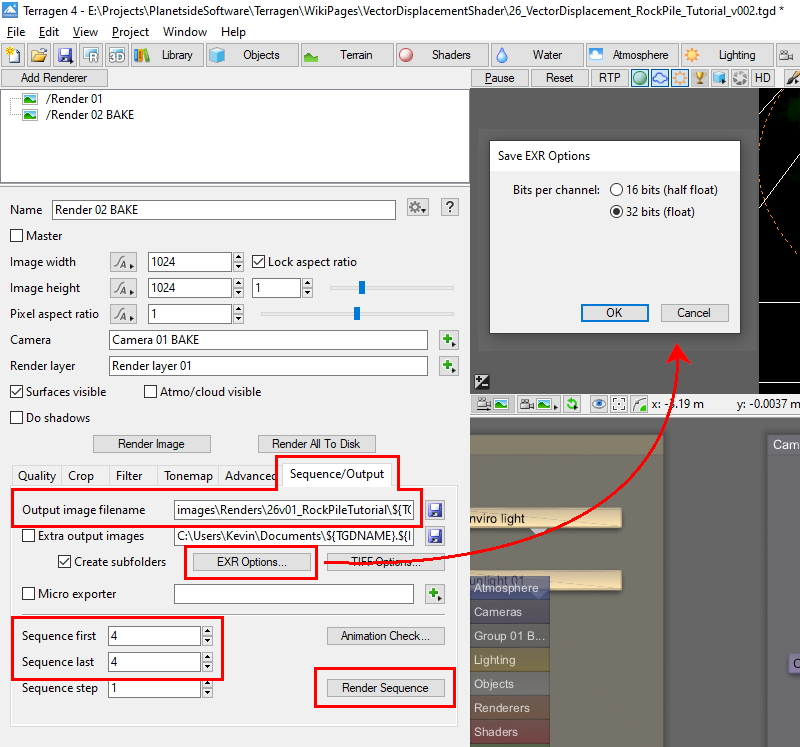