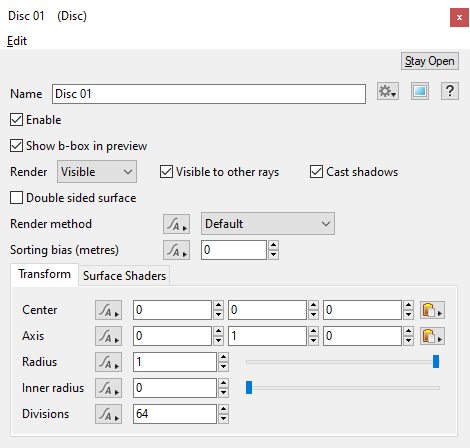 The Disc node creates a flat disc or circle, with or without a hole in the middle, suitable for surface displacements. It is a polygonal object, not a procedural one, and as such can also be used to create polygonal shapes like hexagons and triangles.


Force Displacement: When enabled for the Disc object, its surfaces will be subdivided into micropolygons at render time, which allows the 3D geometry to be displaced correctly but at the expense of slightly longer render times. It is useful when you have some objects you want to render with displacement but you don't want to change how all the rest of your objects are rendered, i.e. Ray traced.

This tab lets you assign a surface shader to texture the Disc object.