The Node Properties pane displays the settings for the currently selected node. When no node is selected in the current layout, this area will be blank. The node settings can also be opened in a separate window by double-clicking a node in the node network. 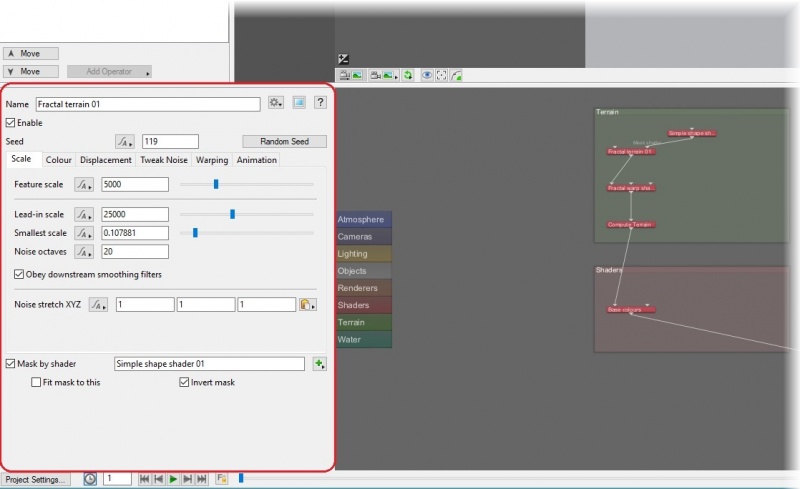 Node properties windows are laid out in a standard way across all node types. Setting names are generally specified in a text label to the left of the setting.

Setting controls often include both a numerical entry field, in which you can enter almost any number, and a slider control which has a more limited range. If you use the slider to select a value, the numerical field will update to reflect the same value, and vice versa. The range of most sliders is within the suggested values for that setting. However, you can set values beyond the suggested range by entering a number directly in the numerical entry field.

When coordinates are displayed, they are usually not separately labeled, but they are always shown in the same order: the standard X, Y, Z. (Remember that Y is the vertical axis in Terragen.)

In some cases only two coordinates are shown, X and Z. This is in cases where only horizontal adjustment is possible (as in the heightfield shader).

Complex nodes with a large number of settings are usually arranged into tabs, with properties that have a common or similar purpose grouped together on appropriately named tabs. Click a tab to select it.

There are several controls and settings that are common to the majority of nodes.

All nodes have a unique name, displayed in the Name field. By default, nodes will be named after their node type, followed by a sequential number. The numerical suffix is automatically generated when a node with a duplicate name is detected. You can rename a node to almost anything you want, though you cannot not use the / character, and you cannot use a name that is already in use by another node.

Buttons to the Right of the Name Field[edit]

To the right of the Name field are three buttons.

The first button is the "Perform an action" button, which has two options related to the node network. The options are as follows:

The next button to the left of the name field is the Shader Preview button. This opens a preview of the current shader in a new 3D preview window. Keep in mind that not all nodes can be previewed, so the preview may appear blank. The shader preview window has all the same controls and functionality of the 3D Preview, but it is specific to the node it was opened from.

On the far right, with a “?” icon, is the 'Help button'. This function takes you to the relevant node reference page that describes the details of the current node type.

Most nodes also have the Enable setting. This controls whether the current node is enabled or disabled. When disabled, the flow of information through the network will bypass this node and it will have no effect on the scene. The scene is processed as if the node does not exist.

Next to many settings is an Animation button.

This button opens a pop-out menu with various options. The options are as follows:

You can find out more about how to animate in the Animation section of the Terragen documentation.

There are some controls that appear only when the node properties are opened in a floating window rather than in the Node Properties pane.

When opened in a new window rather than in the Node Properties pane, all nodes will have an Edit menu at the top of the window. This simply provides the basic edit controls of cut, copy, paste, delete, and undo. All of these functions can also be accessed through the normal hotkeys.

There are a few additional settings and controls that are shared by several nodes, but are not present in all of them.

Certain nodes operate with one or more colour attributes. For these attributes, several colour controls are provided.

The numerical entry field and the value slider both control only the lightness of the chosen color. To select a specific color, you must click on the color swatch on the far right (a light blue in this example image). This will bring up the standard color picker for your operating system.

Note that the lightness control is the most accessible color control because lightness is a the most frequently adjusted option when modifying colors for realistic integration into a landscape scene.

At the bottom of most nodes are controls for the mask functions.

The "Mask by shader" checkbox enables the blending effect. The field to the right displays the name of the currently selected mask shader (if any).

The "Assign shader" button pops up a list of options. The top option is to “go to” the currently assigned mask node, which opens up the settings of that node for editing. Below that is an "Assign shader" option. This provides an organized list of nodes in the scene from which you can select your preferred shader node. Finally, you have the option of creating a new shader node of a specified type. The "Create new shader" menu mirrors many of the options available on the normal shader creation menu, however nodes that cannot act as shader nodes for the current node are excluded from the list.