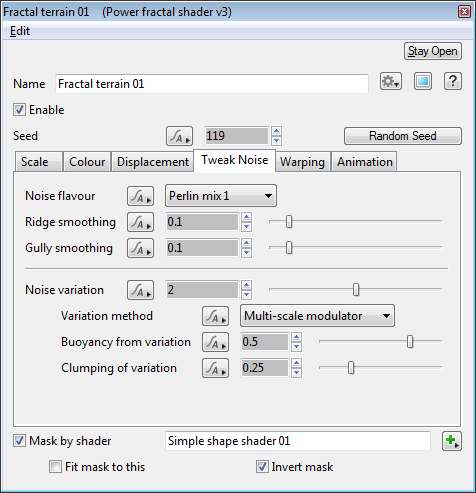 Description:
In this tab, all parameters that affect the "Noise" for the fractal are accessible. In relation to fractals, "Noise" is a pseudo-random, space-filling texture primitive. The actual look of the generated texture changes by choosing a different seed from which the noise functions begins to calculate. Think of "noise" as a way to add pseudo-random variation to a fractal, which by definition is self-similar over all magnitudes. So "noise" combined with the structures pre-defined by a fractal produces a multi-dimensional density function, which TG uses e.g. for procedural terrain generation, clouds, but also mask, displacements, colouring of structures, etc.

These images are using a single octave of noise, aside from the two Perlin mix flavours which use two octaves. This helps to show the underlying pattern more clearly. The "billows" and "ridges" patterns are variations of their basic flavour. "Billows" patterns are a bit like a whole lot of bubbles. Generally speaking they have smooth rounded tops dropping down to quite sharp joins between different blocks of the pattern. In fact the voronoi billows pattern looks a lot like bubbles. The "ridge" patterns are the opposite of the "billows" patterns. It's the same overall pattern but inverted. This means it has narrow sharp ridges which drop down to rounded bottoms. The two "Perlin mix" flavours are a combination of the other Perlin flavours.