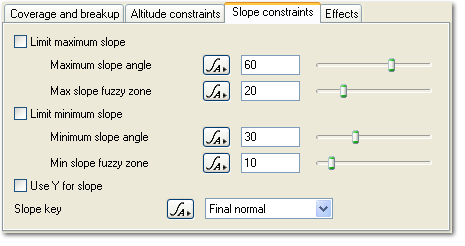 Description:
The Slope Constraints tab has settings which let you control where your surface layer appears according to slope. You can use these settings to make the layer only appear on flatter parts of your scene, steeper parts of the scene or somewhere in between.

Let's say you want to add a green layer for distant grass. Grass typically only grows on areas with a slope less than 45° so you can use the maximum slope constraint to prevent it appearing on areas steeper than that.

You can use the 3D Preview to help you find angles to use for slope constraints. Imagine you have an area of terrain which is gently rising and then turns into a cliff. You want your surface layer to appear everywhere except on the cliff. You can do that like this:

This will restrict your surface layer so it only appears in parts of the scene which are less steep than the cliff.

Back to: Surface Layer

Context clicking shows a contextual menu. On Windows this would normally be done with a right click. On OS X this could be a control-click or a right click.