It’s important to understand that in order for displacements and textures to be in sync and aligned, there should only exist one calculated solution within a given branch of the node network. This is why the Terrain Group ends with a Compute Terrain node in the default Terragen project before moving onto the Shaders Group. This workflow ensures that every shader will have consistent knowledge of the texture coordinates to work with. However, if your workflow doesn’t require normals to be known, such as using Redirect shaders and Vector displacement, then the Texture Coords from XYZ may be a faster solution than the Compute Terrain node because it only calculates texture coordinates.

Therefore, having a Tex Coords from XYZ and a Compute Terrain node in the same branch of a pipeline is not recommended. Multiple Tex Coordinates from XYZ and/or Compute Terrain nodes can exist in a project provided they’re not being used by the same node network branch. For example, a Compute terrain node with a Patch Size of 200 could exist and be used for populations only, while another Compute terrain node with a Patch Size of 20 is connected from the Terrain group (displacements) to the Shader group (texturing). 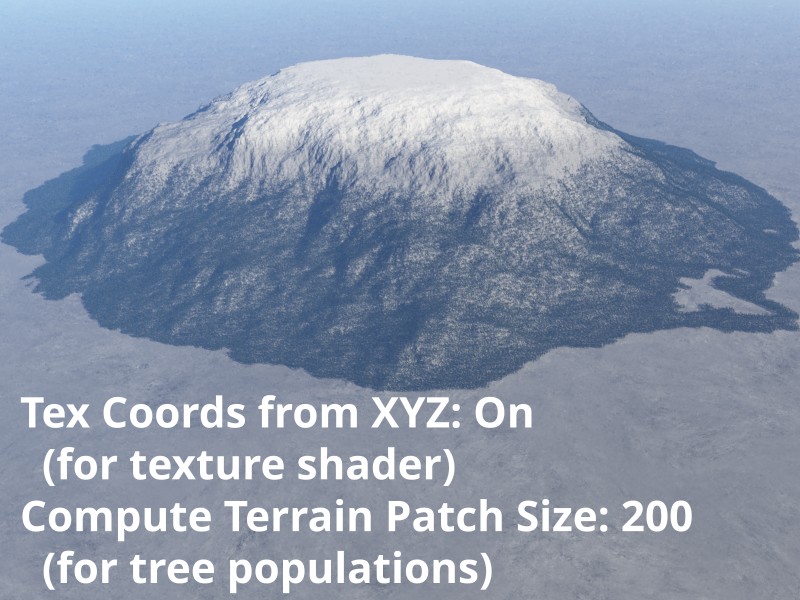 
A shader is a program or set of instructions used in 3D computer graphics to determine the final surface properties of an object or image. This can include arbitrarily complex descriptions of light absorption and diffusion, texture mapping, reflection and refraction, shadowing, surface displacement and post-processing effects. In Terragen 2 shaders are used to construct and modify almost every element of a scene.