Keys are the basic building blocks of animation in Terragen 4. This chapter helps you understand what animation keys are and how to work with them.

For a hands-on example of creating an animation and working with keys please read this tutorial.

Keys are specific points in an animation which you set. When you want to animate a parameter you will typically add at least a start key and end key. When your render an animation the value of the parameter will then be animated between the start key and the end key. You don't need add keys at every frame. Terragen calculates the values in between each key using a process called "interpolation". You can find out more about interpolation in the chapter on interpreting curves in the Curve Editor.

There are two ways to create keys. The first is to use the animation button for a parameter. The other is to insert them using the editors in the Animation Panel such as the Curve Editor and the Dope Sheet.

Every parameter which can be animated has an animation button. When you click the button a menu pops up which lets you choose from several things. One is "Set animation key". Choose that item to set a key. If the parameter has multiple components there will be a submenu which lets you choose to set a key on one or all of the components. When you set a key on a parameter a new key is created at the current frame. The current frame is the one the timeline at the bottom of the main window is set to.

Most animation will need at least two keys to be useful. You can set another key on the parameter by changing the current frame and then setting a key at the new frame.

Naturally you will want to make changes to keys when you are animating a scene. It is possible to do this using only the animation buttons in the parameter views. However this can be a bit awkward and it's recommended that you use the Animation Panel for the bulk of your animation work.

You cannot change the frame of keys using the animation button. You would need to first delete the key at the current frame, change the current frame to the new frame, enter the value you want and set a new key. It's much easier to use the editors in the Animation Panel to move keys. All you need to do is click and drag on the key to move it.

One situation where the animation button is useful is setting keys to precise values. It is possible to move keys to exact values in the Animation Panel editors, if you can't be exact enough just using the mouse, by using the Action buttons for the editors. However you can also do it using the animation button. Make sure the current frame is set to the frame of the key you want to edit. Change the value in the parameter view and set a new key.

The Animation Panel has more options for editing keys. It is much easier to see at a glance what is happening with an animation. Aside from being easier to modify keys you can also perform operations on multiple keys at once. You can also do things like scale keys.

Keys in the Animation Panel[edit]

Keys are shown in the Animation Panel editors as white diamonds. You can click a key to select it. Selected keys are coloured orange. Some keys are yellow diamonds. These are special keys called metakeys and are discussed further below.

In both editors you can click and drag keys to move or scale them. First select the keys either by clicking on them or drag selecting. Once the keys are selected you can manipulate them.

When you use the Dope Sheet you may notice that some of the keys are drawn as yellow diamonds instead of white ones. These yellow keys are special keys called metakeys. You will only see metakeys for parameters which have multiple components (i.e. vectors or colours). You will also only see metakeys in rows in the Dope Sheet for parameter level items in the node list.

A metakey is like a summary. If you look at the image below you will see that for every frame there is a metakey there is one or more normal keys below it at the same frame. Metakeys are helpful for giving you an overview of the animation without having to expand a param to show all its components. 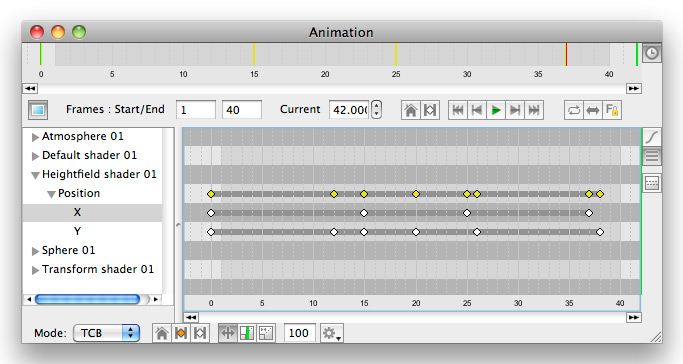 Metakeys allow you manipulate more than one key at once. When you select a metakey it also selects all the normal keys below it. Any operation you perform on the metakey will also happen to the normal keys at that frame. Looking at the image above you will see that there are keys for each of the X and Y components of the Position param at frame 15. If you select the metakey at frame 15 you can move both of those keys at once, instead of having to select all the normal keys and move them or move them individually. You could also delete all the keys at frame 15 by selecting the meta key at frame 15 and then deleting it.

Back to the Animation Module Guide