The Terragen Populator has a rich feature set that distributes 3D object instances in very realistic ways. But even with variation in placement, scale and rotation, each population is limited to one piece of geometry, and the textures or materials it was created with, which can result in a visible repetition that limits the realism of the end result. What you want is each object to be slightly different, and one solution is to use the populator’s colour tinting tools.

Let’s explore this in an empty scene by creating a population of rocks. 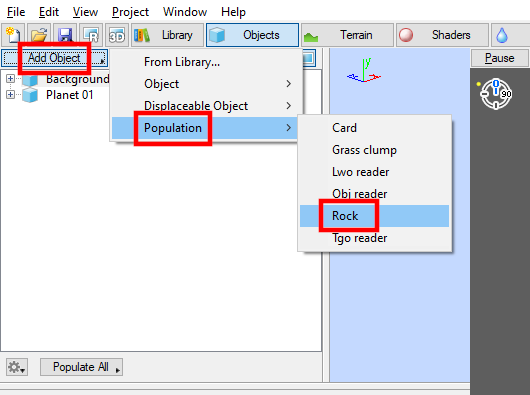 Two new nodes appear in the object list, the first one is the population node and the second one is the geometry node that will be instanced by the populator. 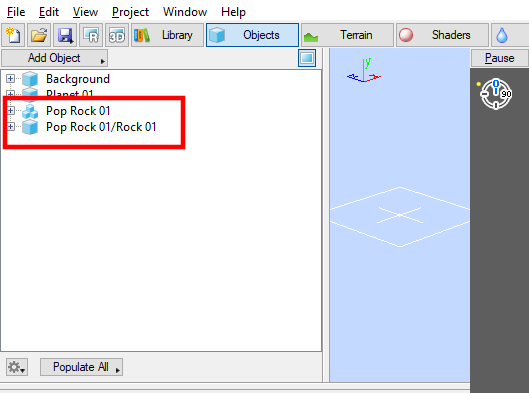 Let’s create an evenly spaced and orderly array of rock objects in order see the tinting effects most clearly. To do that we'll remove any object rotation, spacing and scale variation. In order to minimize the number of rocks needed to fill up the entire population area, we'll scale the rocks a bit larger and reduce the overall area to be populated.

Now that the rock population has been created, pull back your camera until you get a good view of all the rocks. To learn more about positioning the camera and navigating around your project, click here.

Click on the “RTP” button to enable the Ray-Traced Preview mode for the 3D Preview pane, which provides the best view of the project without using the Renderer to render a frame. 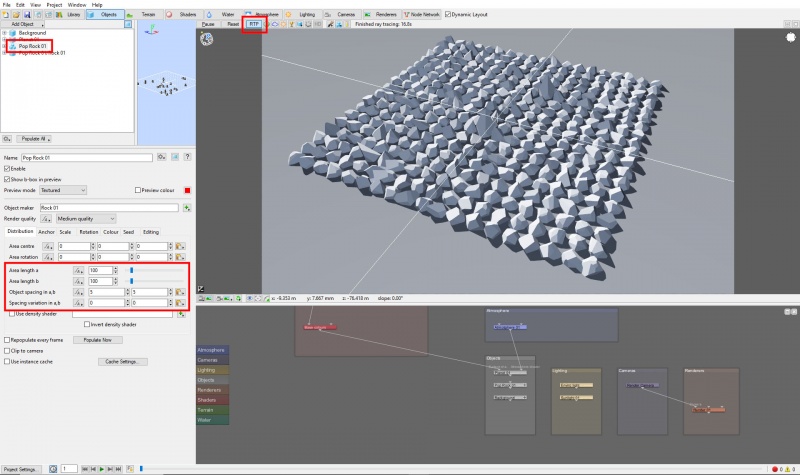 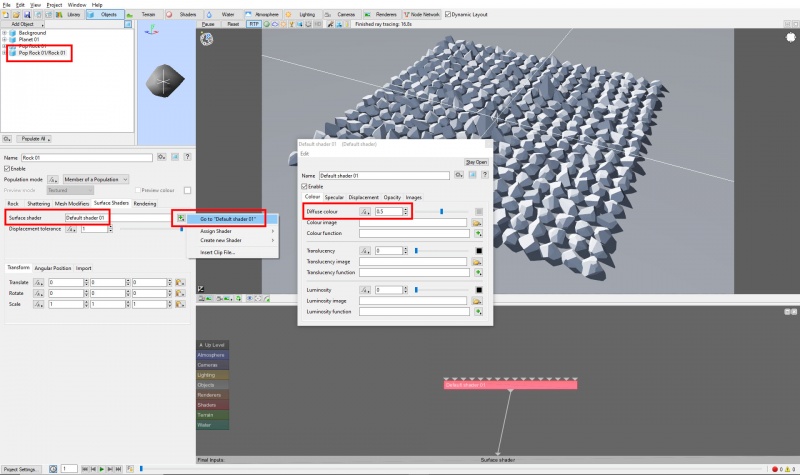 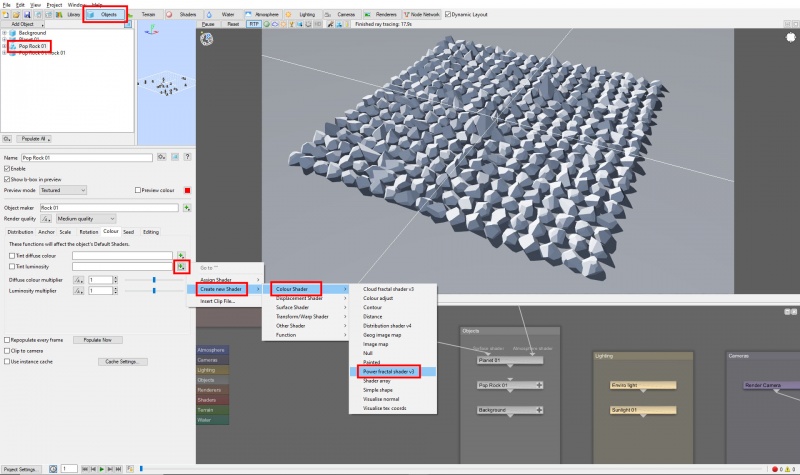 With the power fractal shader now assigned to the Tint diffuse colour, we’ll adjust the scale of the noise pattern to better fit the size of the rocks and population area, which will make it easier to see the effects of the tinting process, and rename the node to something more descriptive so that it's easier to find in the node lists. 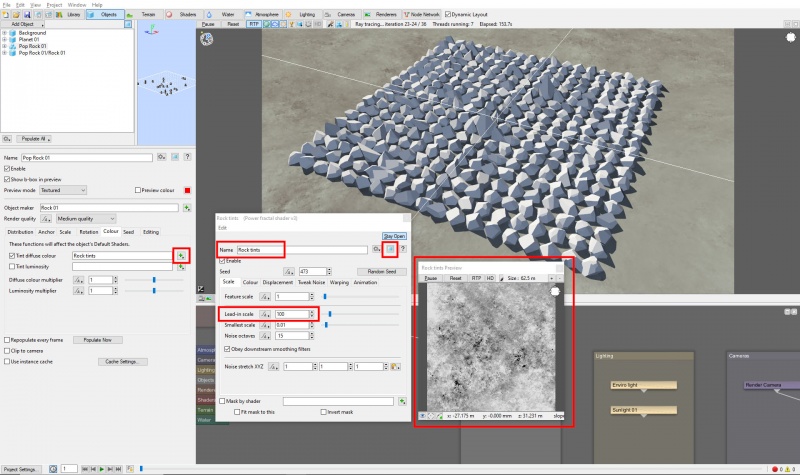 We want to increase the contrast of the fractal noise pattern in order to make the colour variation more visible. We'll use the Colour contrast, offset and roughness parameters located on the Colour tab to do this. To learn more about these parameters click here.

As you can see in this rendered frame, the rocks are now shaded in a variety of gray values. Internally, Terragen multiplied the rocks diffuse color value by the value supplied by the tinting function. We’ll get into the math in a moment, but generally speaking, this has the effect of darkening each rock. 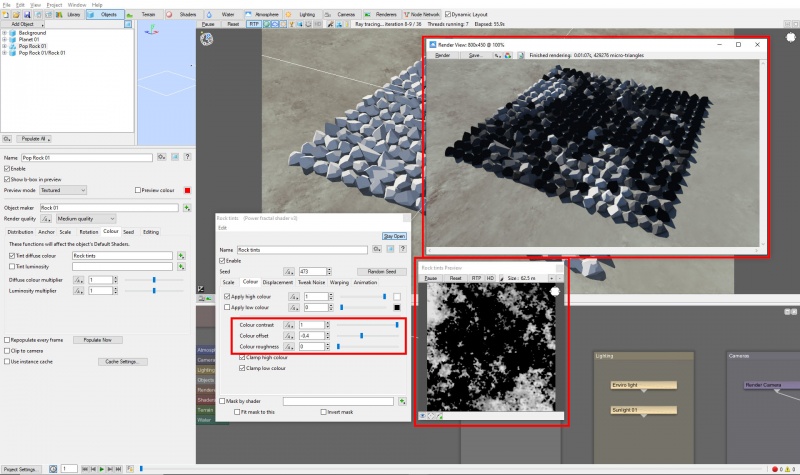 Let’s repeat this step once more but this time use colours other than black and white for the fractal noise pattern.

In the render below we can see that the tinting process has given the rocks new hues of reds, greens and yellows. 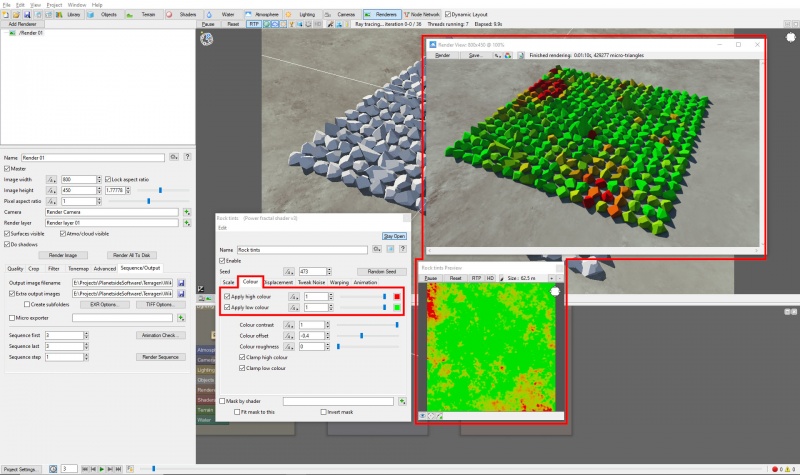 The math behind color tinting a population[edit]

Let’s review our progress so far to understand the math that is taking place internally in Terragen.

In conclusion, the math behind the final tinting value looks something like this:

In our examples so far, the object being tinted had a single diffuse colour value to start with, but most of the time we’ll be populating objects that use texture maps which contain many diffuse colour values. We can replicate this by assigning a new power fractal shader directly to the rock object’s texture, and scaling the noise pattern to appropriately fit the size of the rock which is about 1 meter.

Now that the rock has a new texture, temporarily disable the population's tint function so we can see what the new texture looks like.

In the rendered frame below, we see that every rock now has texture variation to begin with. 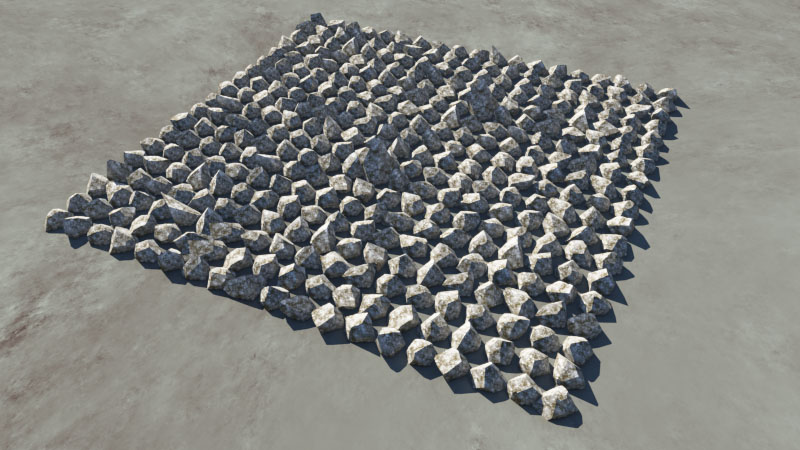 Here is the same rendered frame, but with the "Tint diffuse colour" checkbox enabled. Now the tinting function is taking into account the texture variations in each rock. 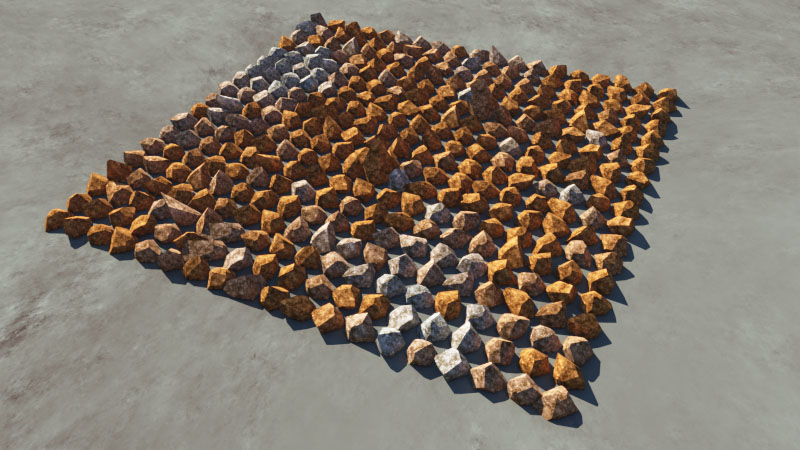 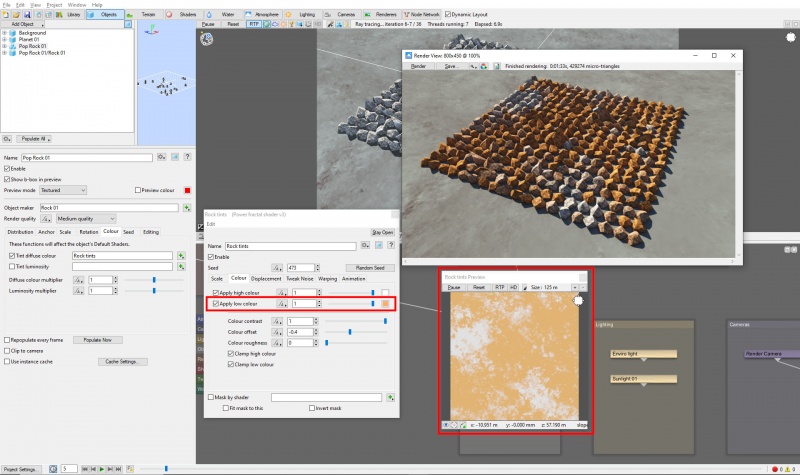 Keep in mind that generally speaking, applying a tint colour will darken the final colors of the instanced objects. If the objects become to dark, we can use the "Diffuse colour multiplier" and apply a value greater than 1.0 to help lighten them back up. In the rendered image below, we've set the “Diffuse colour multiplier” value to “2.0” so that we can see the new texture for the rocks with the tint applied and with twice the diffuse value. 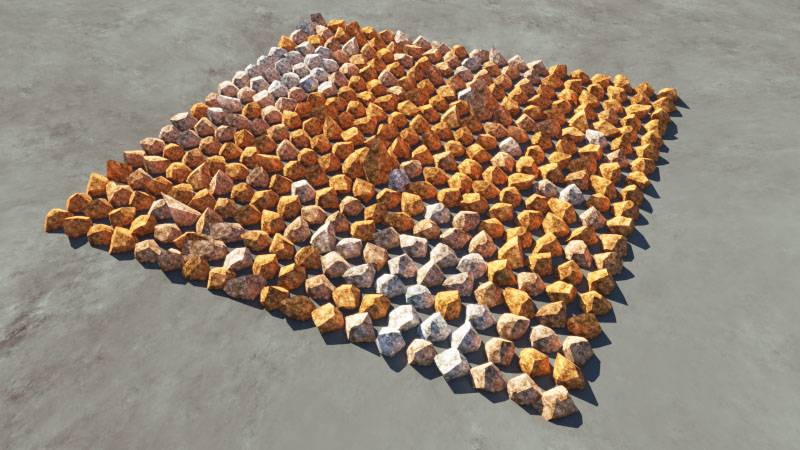 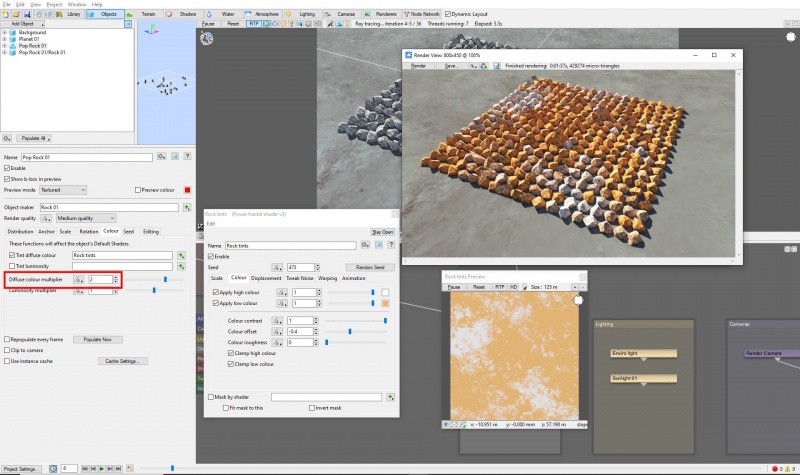 Last of all, the “Diffuse colour multiplier” can be used to globally darken the instanced objects by entering a value less than 1.0. In this rendered frame, the "Diffuse colour mulitplier" value has been set to “0.5”, and we can see the new texture for the rocks with the tint applied but only half the diffuse value. 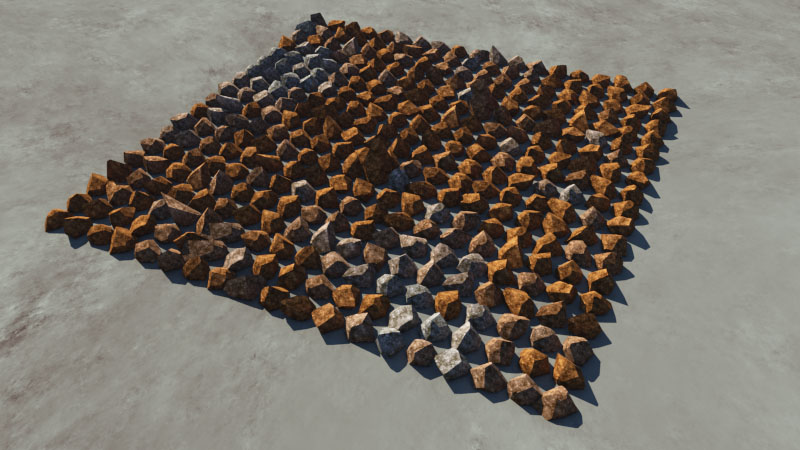 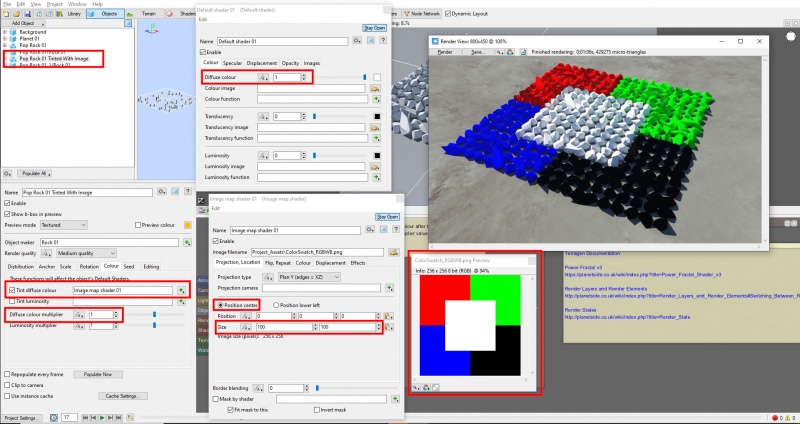 In conclusion, knowing how the tinting process works behind the scene gives us a lot of control for adjusting the final colors of our instances.

Tutorial: Masking Populations with Inverted Fractals
This tutorial shows you some methods to create distinct bands of objects in overlapping populations.

Tutorial: Population Masking Techniques
This tutorial shows you how to create masks for populations using various techniques like Simple shape shaders and the Painted shader.