Get Position in Texture

The Position in Texture nodes provides the "position in texture" of the current Render State. The Render State is affected by any shaders which were called before this function is called, among other things.

The input connection is not used by this node (consistent with all Get nodes).

Even when texture coordinates are not clearly needed, Get Position in Texture has a couple of advantages over Get Position. First, in a typical Terragen scene, Position in Texture is set by Compute Terrain or Tex Coords From XYZ to provide a consistent value between displacement contexts and colour/lighting contexts for any shaders that are computed after those nodes. Second, in order to make use of transforms from Transform Shader or Warp Shader, you need to use Position in Texture.

In contexts where Position in Texture has not been updated (e.g. displacement before Compute Terrain or Tex Coords From XYZ), Get Position may be more useful.

Fun with Get Position in Texture[edit]

Let’s explore the Get Position in Texture node and how to modify its output to create interesting shapes which can be used to drive displacement or colour functions.

Many 3D objects, like those you would import into Terragen for populations, have internal UV texture coordinates which define their texture space. In the example below, the cube object’s vertices have been laid out on the UV grid and a texture map has been constructed based on the vertex positions. When the image is mapped to the geometry using the UV coordinates the texture aligns properly to the object. 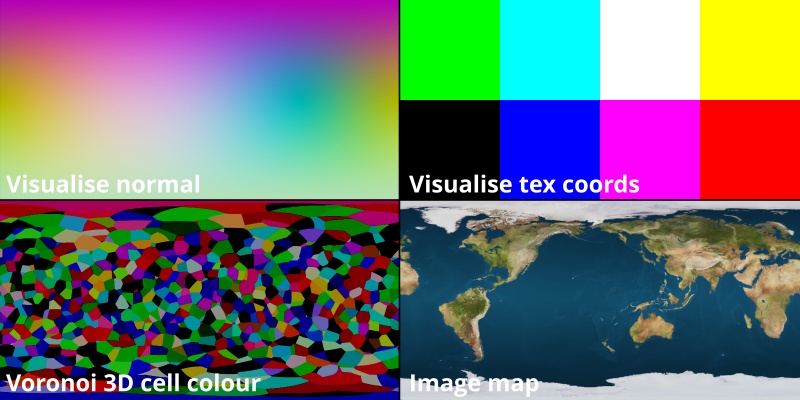 Let’s use a Voronoi 3D cell colour node to apply some pretty colours to the surface of the terrain in the default project. In order to have control over where the Voronoi noise pattern appears in the project, we’ll start by adding a new Surface Layer, which will provide constraints for altitude and slope as well as masking abilities.

Procedural noise functions like Perlin 3D scalar and Voronoi 3D require a Get Position in Texture node in order to know where the sampled point exists within the texture coordinates. They also have two additional inputs, one to set the scale of the noise pattern and the other to randomize the pattern.

This voronoi noise pattern created a colourful but fairly uniform pattern across the landscape. To modify the shape of the noise pattern cells, you can manipulate the output of the Get position in texture node before the Voronoi 3D cell colour node receives it. One way to do this is to add a Mulitply vector node in-between the Get position in texture node and the Voronoi 3D cell colour nodes.

Furthermore, we can warp the shape of the noise pattern cells to add more details and break-up any patterns, with Power fractal shaders and warp shaders.

Now you have an idea of how to use the Get position in texture node, and manipulate its output. This data can then be used to drive displacement and colour functions.